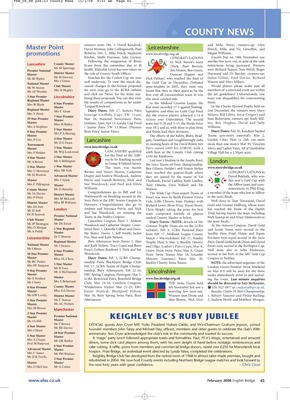 Following the resignation of Brian to Nick Steven’s team another low turn-out, in spite of the rank

Evans from the committee due to ill (Nick, Paul Bowyer, restrictions being increased. Winners

Club Master cussed changes in the format proposed semi-finalists in 2005, they went one Would players please make sure all

Mr AF Woollin Mrs H Hughes for next year, go to the KCBA website better this time in their quest to be the members of a restricted event are within

and click on ‘News’ for the letter out- first ever all-Leicestershire team to win the set guidelines? Unfortunately, one

3 Star Premier Lincolnshire lining these proposals. You can also view this most coveted title. team was disqualified for contravening

8 Star Premier the results of competitions so far under In the Midland Counties League, the them.

Mrs C Grant hamshire and then on Gold Cup Final

Tournament in running heats of the David Boston Sim more than one team); Mar 30, Vincents

Master 3 Star Master www.lancsbridge.co.uk Pairs raised £400 for LOROS, with a Men’s and Ladies’ Pairs. All at Dunholme

2 Star Master for the final of the Tolle- £100 for Rainbows.

Mr A Rosen Mr A Millington

in Group B behind Surrey. the Leics Teams-of-Four championship,

Mrs U Hewetson Miss SB York Barnes and Stuart Norris, Catherine have reached the quarter-finals where CONGRATULATIONS to

they are joined by the teams of Val

Mrs P Drain Wattleworth on finishing second in the Four) was won by Keith Preston (Greta in the semi-finals.

London Andrew and Veronica Petrie, and Nick Chris Sleigh) taking the prize for best has reached the finals of the English

Dr H Searson and Sue Woodcock, on winning the team comprised entirely of players Trials having beaten the team including

Premier National Teams at the Peebles Congress. Nick Sandqvist and Artur Malinowski in

ranked County Master or below.

9 Star Premier Mr A McDiarmid ionship, Bury Athenaeum; Feb 22-24, Lincolnshire on Mar 8-9 will be away for the three

Mr BE Davies founder members John Tarpy and Michael Day, officers, members and other guests to celebrate the club’s 40th

10 Star Premier anniversary. Ann Cryer acknowledged the club’s role in the community and toasted its success.

Prof M Patterson diners, some slick card players among them, with his own sleight of hand before nostalgic reminiscences and

Mr D R Twells Keighley Bridge Club has developed from the rented room of 1968 to almost tailor-made premises, bought and

refurbished in 2004. We now host County events including Northern Bridge League matches and look forward to

the next forty years with great confidence. – Chris Close