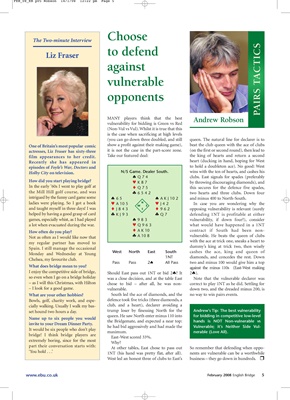 MANY players think that the best

vulnerability for bidding is Green vs Red

(Non-Vul vs Vul). Whilst it is true that this

is the case when sacrificing at high levels

(you can go down three doubled, and still queen. The natural line for declarer is to

One of Britain’s most popular comic show a profit against their making game), beat the club queen with the ace of clubs

actresses, Liz Fraser has sixty-three it is not the case in the part-score zone. (on the first or second round), then lead to

film appearances to her credit. Take our featured deal: the king of hearts and return a second

Recently she has appeared in heart (ducking in hand, hoping for West

episodes of Foyle’s War, Doctors and to hold a doubleton ace). No good: West

Holby City on television. N/S Game. Dealer South. wins with the ten of hearts, and cashes his

How did you start playing bridge? ♥K87 by throwing discouraging diamonds), and

In the early ’60s I went to play golf at ♦Q75 this secures for the defence five spades,

the Mill Hill golf course, and was ♣6542 two hearts and three clubs. Down four

♥J42 In case you are wondering why the

and taught myself in three days! I was ♦ J843 S ♦962 opposing vulnerability is relevant (surely

games, especially whist, as I had played ♠983 vulnerability, if down four?), consider

a lot when evacuated during the war. ♥Q963 what would have happened in a 1NT

Not as often as I would like now that ♣ A 10 8 vulnerable. He beats the queen of clubs

my regular partner has moved to with the ace at trick one, sneaks a heart to

Spain. I still manage the occasional dummy’s king at trick two, then wisely

Monday and Wednesday at Young West North East South cashes the ace, king and queen of

1NT diamonds, and concedes the rest. Down

What does bridge mean to you? against the minus 110s (East-West making

so even when I go on a bridge holiday was a close decision, and at the table East Note that the vulnerable declarer was

– as I will this Christmas, with Hilton chose to bid – after all, he was non- correct to play 1NT as he did. Settling for

– I look for a good game. vulnerable. down two, and the dreaded minus 200, is

What are your other hobbies? South led the ace of diamonds, and the no way to win pairs events.

cially walking. Usually I walk my bas- club, and a heart), declarer avoiding a

queen. He saw North enter minus 110 into for bidding in competitive low-level

Name up to six people you would

the Bridgemate, and expected a near top: hands is NOT Non-vulnerable vs

invite to your Dream Dinner Party.

he had bid aggressively and had made the Vulnerable; it’s Neither Side Vul-

It would be six people who don’t play

bridge! I think bridge players are

extremely boring, since for the most Why?

part their conversation starts with: At other tables, East chose to pass out So remember that defending when oppo-

‘You hold . . .’ 1NT (his hand was pretty flat, after all). nents are vulnerable can be a worthwhile

West led an honest three of clubs to East’s business – they go down in hundreds.