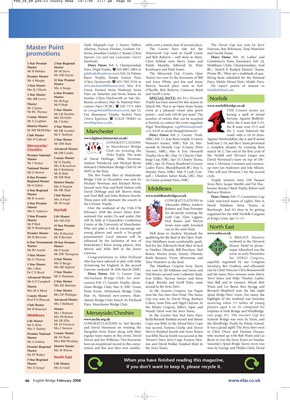 Daily Telegraph Cup: 1. Surrey (Jeffrey tably, over a match clear of second place. The Dorset Cup was won by Jerry

and Rob Roberts – well done to them.

Ms AM Gayfer gelohnake@waitrose.com); Feb 24, Palmer The Merseyside Cup (County Open Pinner BC. There are a multitude of qua-

6 Star Premier Pairs on Saturday and Swiss Teams on and Geoff Cowie.

Kenzie, as above); Mar 16, National New- Trophy has been moved for this season to

5 Star Master or youngchelsea@btconnect.com); Apr 13, event at a pleasant venue plus green THE County teams are

Mr LH Dreebin Fox Shammon Trophy, Seniors Pairs points – and only £40.00 per team! The having a spell of mixed

County Master Mrs SS Sallis (Steve Eginton, 01628 780862 or number of entries that can be accepted fortune. Against Bedford-

Club on winning the Teams), MBC; Mar 9, Eric Howarth match 18-2. The end of the first cycle of

National Master Ladies Pairs), Blundellsands BC; May 5, up were Jan Anderson and Jola Allison.

Mr G Horton Mr B Shah Mayday Pairs, MBC; May 9 Lady Con- They will join Division 1 for the second

Mrs S Sargent Second were Alan and Kath Nelson with

Mr R Acaster Mrs A Finch These pairs will represent the county in CONGRATULATIONS to (club restricted teams of eight); Mar 9,

Over the weekend of the 15th-17th Robson and Tony Forrester Bawburgh. And it’s time to be getting

Mr N Worthington Master Why not plan a visit to encourage our out in the semi-final. North East

Mr H Brewster Mr P Howlett presentation? Local interest will be qualifying for the final of the Open Trials. A BRIGHT, blustery

who has been selected to play with John Tony Waterlow in the final. superbly organised by our Congress

Armstrong for England in the second The Middlesex Congress Swiss Teams Secretary, Bev Godfrey, and efficiently

the Rhodes Congress, Jeffery Alper and players aged 6 to 16 competed for

Wendy Tabor won the Swiss Teams. trophies in both Bridge and MiniBridge.

Mrs V Durbin Mrs J Stenson and David Stevenson on winning the was second, Vanessa Clarke and Trevor It was a grand sight! The Swiss Pairs went

County Master Llangollen Swiss Teams along with their Morris finished fourth and Anne Rosen to Chris Owen and Damian Hassan,

Mr NJ Watts regular team-mates in this event, David was fifth; Nicola Smith was second in the who teamed up with Bob Watts and Liz

etition and this year they won comfor- the Swiss Teams. won by George and Phyllis Clark, David

5 Star Regional When you have finished reading this magazine,

Mrs E Gergel Mrs G Gold if you don’t want to keep it, please recycle it.