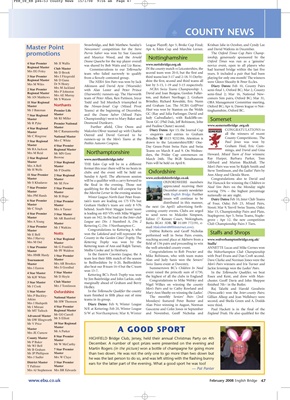 and Maurice Wood, and the Arnold Nottinghamshire ionship, generously sponsored by the

was shared by Bob Watts and Liz Reese. novice event, open to all players who

Club Master Commiserations to our Tollemache IN the county match vs Leicestershire, the had learned bridge within the last five

team who failed narrowly to qualify years. It included a pair that had been

3 Star Premier Mrs I Fitzgerald from a fiercely contested group. third teams lost 3-17 and 2-18. Vs Derby- playing for only one month! The winners

The NEBA Sim Pairs was won by Jack were Glenn Sheasby & Peter Eccles.

Master Northants the Niman-Israel Cup (Mixed Pivot and Graham Lee. The NCBA GolfPrint Oxford BC; Apr 6, Dawes league vs Not-

Mr J Bateman Premier Life Teams) at the beginning of December, Heat was won by Stanton on the Wolds tinghamshire, Oxford BC.

Peebles Autumn Congress. drawn to the Leicestershire/EBU One-

Mr RA Jackson Regional Master Teams on March 8 and 9. On Wednes- mings, and David and Gina

Master 3 Star Regional Pairs will be held on April 8. Gibbard and Marion Blackhall. The

THE Eden Cup will be in a different

Master Men’s Pairs was won by Ralph Smith and

Mr H Wells format this year: there will be no heats in

Mr P Double Steve Tomlinson, and the Ladies’ Pairs by

clubs and the event will be held on Oxfordshire Ann Alsop and Glenda Shave.

will be a qualifier with a carry forward to OXFORDSHIRE members

the final in the evening. Those not appreciated receiving their

the Murchie Lerner in the evening session. with English Bridge. Further

Master Master Graham Hedley’s team are only 8 VPs the next (in April) advertising forth- Street; Mar 9, Yeovil Swiss Teams, Oake;

Master team on 342. In the lead in the Inter-club Staplegrove; Apr 5, Swiss Teams, Staple-

Master Congratulations to Kettering A who Debbie Roberts and Geoff Nicholas

Mrs J Harvey 6 Star Regional County in the Garden Cities’ Trophy. The reaching second place at Malvern from a www.wolverhamptonbridge.org.uk/

Mrs HMR Hardy 1 Star Premier In the Eastern Counties League, the A Mike Robinson, who with team mates with Pearl Evans and Dan Croft second.

won 13-7. event raised the princely sum of £750, In the Tollemache Qualifier, we beat

Kettering BC’s Porch Trophy was won the highest of all the clubs in England! Essex and Kent, and drew with Man-

by Jim Bainbridge and John Larkin, only Congratulations to Mike Webley and chester. Geoff Davis and John Sheppee

3 Star Master Club Master marginally ahead of Graham and Berry

1 Star Master Oxfordshire In the Tollemache Qualifier the county Mary-Ann Sheehy on winning the Ladies’. (Newcastle) won the Inter-county Pairs;

Atkins teams in its group. Mondays) featured Peter Baxter and second, and Sheila Green and A. Dodds

4 Star Premier Alan Prior winning in August, Norman were third.

Regional Master N/E at Kettering; Feb 20, Winter League Gascoyne and Colin Jones in September Paul Hackett is in the final of the

S/W at Northampton; Mar 8, Winter and November, Geoff Nicholas and England Trials. He also qualified for the

Mr A Parker A GOOD SPORT

Mr P Baker December. A number of spot prizes were presented on the evening and

Mrs J Sadler Mrs W Claye he was the last person to do so, and was left sitting with the flashing bunny

District Master 3 Star Premier ears for the latter part of the evening. What a good sport he was too!