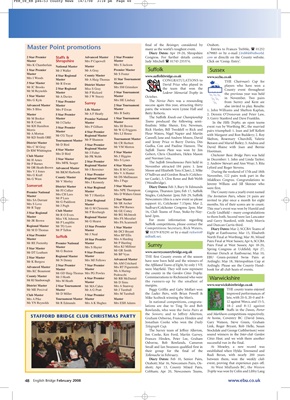 final of the Reisinger, considered by Oxshott.

Master Point promotions many as the world’s toughest event. Entries to Frances Trebble, 01252

Mr A Haig-Thomas CONGRATULATIONS to

Surrey from Surrey and Kent are

Master The Invitation Pairs, where 24 pairs are

Master Regional Master to them both. Second were Ian Lancaster

Mr K Burgess have now been held and the winners of Ardingly; May 18, Metropolitan Cup at

Ms AM Critchard the Affiliated Teams of Eight, by only 1 VP,

Master Master were Mayfield. They will now represent book for all club heats of events.

the county in the Garden Cities Trophy.

County Master Mr J Heath Commiserations to Richmond who were

the runners-up by the smallest of

Rowlands, who won the Swiss Pairs at Staffs in the Dawes, Porter

the Seniors; and to Jeffrey Allerton, and Markham competitions respectively.

The Surrey team of Jeffrey Allerton, Stockdale and George Cuthbertson) were

Frances Hinden, Peter Lee, Graham Cities Heat, and we wish them another

Small and Ian Swanson qualified first in At Moseley, a new record was