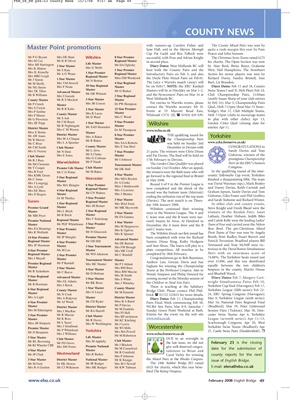 Master Point promotions Jane Hall, and in the Marion Murtagh quite a rude margin this year by Pam

Mr A G Weare Regional Master Introductory Pairs on Feb 3, and also Section for newer players was won by

Master Mr G Barker Masters will be at Hinckley on Mar 1-2, Swiss Teams I and II, Holt Fleet; Feb 24,

Mr B Williams Mr GR Wilmott and the Newcomers’ Pairs on Mar 16 at Club Championship Pairs, 11:00am

Mr G Provenza to play with other clubs); Apr 13,

District Master 8 Star Premier THE qualifying round for

Mrs E Jones Mr S Clarke Master and Pat Davies. The final will be held on Gisborne, winners of the

Mr C Jonas in May 2008. finished a disappointing fifth. The team

Mrs J Longrigg Round 4 of 9 in the Premier League is was David Waxman (npc), Mark Bratley

Mrs A Lynd now completed and the shock of the and Danny Davies, Keith Cornish and

3 Star Master (Davies). The next match is on Thurs- and Sarah Teshome and Richard Winter.

2 Star Master ways in the Western League. The A and

Premier National rowly beaten by Avon. At Hereford in

Master Mr PGF Whitehouse 3 Star Premier December, the A team drew and the B Team of Four and carried away the Nelson

Mrs K Spamer The Wiltshire Knock-out first round has

Mrs JF Hootman Master 3 Star Tournament and Sam Sloan. The losers will play in a

Tournament Master Master over £1000, and this was distributed

Ingham for winning the Championship

5 Star Master Life Master DUE to an oversight in

Mr FD Grove the last issue, we did not February 23 is the closing