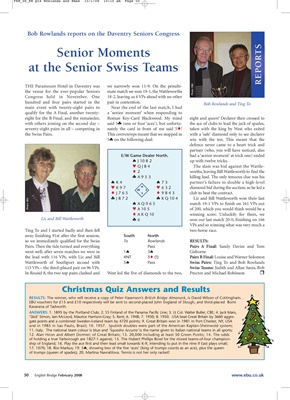 at the Senior Swiss Teams

THE Paramount Hotel in Daventry was we narrowly won 11-9. On the penulti-

the venue for the ever-popular Seniors mate match we won 19-1, the Wattleworths

Congress held in November. One 18-2, leaving us 4 VPs ahead with no other

hundred and four pairs started in the pair in contention. Bob Rowlands and Ting To

main event with twenty-eight pairs to Near the end of the last match, I had

qualify for the A Final, another twenty- a ‘senior moment’ when responding to

eight for the B Final, and the remainder, Roman Key-Card Blackwood. My mind eight and queen! Declarer then crossed to

with others joining on the second day – said 5♣ (one or four ‘aces’), but unfortu- the ace of clubs to lead the jack of spades,

seventy-eight pairs in all – competing in nately the card in front of me said 5♦! taken with the king by West who exited

the Swiss Pairs. This contretemps meant that we stopped in with a ‘safe’ diamond only to see declarer

5♠ on the following deal: win with the ten. This meant that the

defence never came to a heart trick and

partner (who, you will have noticed, also

E/W Game Dealer North. had a ‘senior moment’ at trick one) ended

♥ QJ84 The slam was bid against the Wattle-

♣A953 killing lead. The only tenuous clue was his

♥632 diamond bid during the auction, so he led a

VPs and so winning what was very much a

Ting To and I started badly and then fell two-horse race.

away finishing 91st after the first session, South North

so we immediately qualified for the Swiss To Rowlands RESULTS:

Pairs. Then the tide turned and everything Pass Pairs A Final: Sandy Davies and Tom

went well; after seven matches we were in 1♠ 3♠ Gisborne

Wattleworth of Southport second with 5♠ Pass Swiss Pairs: Ting To and Bob Rowlands

In Round 8, the two top pairs clashed and West led the five of diamonds to the two, Proctor and Michael Robinson

RESULTS: The winner, who will receive a copy of Peter Hasenson’s British Bridge Almanack, is David Wilson of Cottingham.

EBU vouchers for £15 and £10 respectively will be sent to second-placed John England of Slough, and third-placed Bomi

and in 1985 in Sao Paulo, Brazil; 10. 1957. Sputnik doubles were part of the American Kaplan-Sheinwold system;

11. Italy. The national team colour is blue and ‘Squadra Azzurra’ is the name given to Italian national teams in all sports;

of holding a true Yarborough are 1827-1 against; 15. The Hubert Phillips Bowl for the mixed teams-of-four champion-

ship of England; 16. Play the ace first and then lead small towards K-9, intending to put in the nine if East plays small;

of trumps (queen of spades); 20. Martina Navratilova. Tennis is not her only racket!