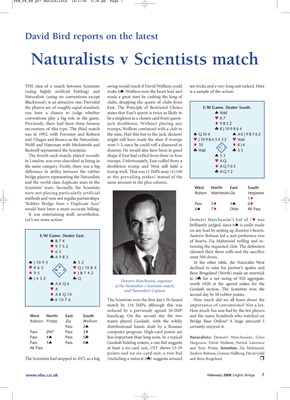 David Bird reports on the latest

THE idea of a match between Scientists swing would result if David Wolfson could ten tricks and a very long suit indeed. Here

(using highly artificial bidding) and make 6♠. Wolfson won the heart lead and is a sample of the action:

Blackwood), is an attractive one. Provided clubs, dropping the queen of clubs from

conventions play a big role in the game. be a singleton as a chosen card from queen- ♥ K7

Previously, there had been three famous jack doubleton. Without playing any ♦ 9832

Wolff and Hamman with Meckstroth and were 3-3, since he could ruff a diamond in ♦ 10 W

Rodwell represented the Scientists. dummy. He would also have been in good ♣ Void S

The fourth such match, played recently shape if East had ruffed from three or four ♠ 53

in London, was over-described as being in trumps. Unfortunately, East ruffed from a ♥ AQ

the same category. Firstly, there was a big doubleton trump and West still held a ♦ AQ765

and the world-class duplicate stars in the same amount in the plus column.

methods and were not regular partnerships. 1♦

would have been a more accurate billing. 6♠ 7♦ Dble All Pass

It was entertaining stuff, nevertheless.

Let’s see some action: Demetri Marchessini’s bid of 7 ♦ was

brilliantly judged, since 6♠ is easily made

on any lead by setting up dummy’s hearts.

♥9752 turning the requested club. The defenders

♦63 claimed their three ruffs and the sacrifice

♠AKQ6 of the Naturalists v Scientists match, worth £920 at the agreed stakes for the

♥A and Naturalists’ Captain Goulash section. The Scientists won the

match by 134 IMPs, although this was importance of conventions? Not a lot.

West North East South handicap. On the second day the two and the many hundreds who watched on

Pass 2♠ distributional hands dealt by a Russian certainly enjoyed it.

The Scientists had stopped in 4NT, so a big (including a natural 2♣) suggests around and Boye Brogeland.