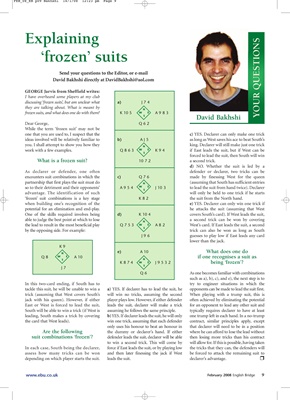 I have overheard some players at my club

discussing ‘frozen suits’, but am unclear what a) J74

they are talking about. What is meant by N

While the term ‘frozen suit’ may not be

one that you are used to, I suspect that the c) YES. Declarer can only make one trick

you. I shall attempt to show you how they N king. Declarer will still make just one trick

E K94 if East leads the suit, but if West can be

forced to lead the suit, then South will win

d) NO. Whether the suit is led by a

As declarer or defender, one often defender or declarer, two tricks can be

so to their detriment and their opponents’ A954 S

J 10 3 to lead the suit from hand twice). Declarer

advantage. The identification of such will only be held to one trick if he starts

‘frozen’ suit combinations is a key stage K82 the suit from the North hand.

when building one’s recognition of the e) YES. Declarer can only win one trick if

potential for an elimination and end-play. he attacks the suit (assuming that West

One of the skills required involves being d) K 10 4 covers South’s card). If West leads the suit,

able to judge the best point at which to lose N

a second trick can be won by covering

the lead to result in the most beneficial play Q753 W E A82 West’s card. If East leads the suit, a second

by the opposing side. For example: trick can also be won as long as South

J96 guesses to play low if East leads any card

lower than the jack.

if one recognises a suit as

Q6 As one becomes familiar with combinations

In this two-card ending, if South has to try to engineer situations in which the

trick (assuming that West covers South’s will win no tricks, assuming the second When playing with a trump suit, this is

East or West is forced to lead the suit, leads the suit, declarer will make a trick for an opponent to lead any other suit and

South will be able to win a trick (if West is assuming he follows the same principle. typically requires declarer to have at least

leading, South makes a trick by covering b) YES. If declarer leads the suit, he will only one trump left in each hand. In a no-trump

the card that West leads). win one trick, assuming that each defender contract, similar principles apply, except

Are the following the dummy or declarer’s hand. If either where he can afford to lose the lead without

suit combinations ‘frozen’? defender leads the suit, declarer will be able then losing more tricks than his contract

to win a second trick. This will come by will allow for. If this is possible, having taken

In each case, South being the declarer, force if East leads the suit, or by playing low the tricks that they can, the defenders will

depending on which player starts the suit. leads the suit. declarer’s advantage.