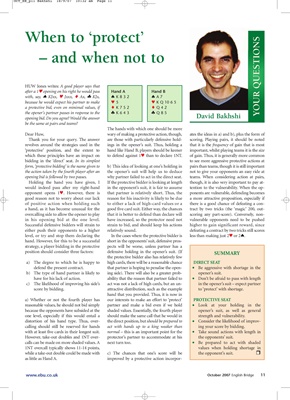 – and when not to

opening bid. Do you agree? Would the answer David Bakhshi

be the same at pairs and teams?

The hands with which one should be more

Dear Huw, wary of making a protective action, though, ates the ideas in a) and b), plus the form of

Thank you for your query. The answer are those with particularly defensive hold- scoring. Playing pairs, it should be noted

revolves around the strategies used in the ings in the opener’s suit. Thus, holding a that it is the frequency of gain that is most

‘protective’ position, and the extent to hand like Hand B, players should be keener important, whilst playing teams it is the size

which these principles have an impact on to defend against 1♥ than to declare 1NT. of gain. Thus, it is generally more common

bidding in the ‘direct’ seat. In its simplest to see more aggressive protective actions at

form, ‘protective bidding’ is the name given to b) This idea of looking at one’s holding in pairs than teams, though it is still important

opening bid is followed by two passes. why partner failed to act in the direct seat. teams. When considering action at pairs,

Holding the hand you have given, I If the protective bidder is looking at length though, it is also very important to pay at-

would indeed pass after my right-hand in the opponent’s suit, it is fair to assume tention to the vulnerability. When the op-

opponent opens 1♥ . However, there is that partner is relatively short. Thus, the ponents are vulnerable, defending becomes

good reason not to worry about our lack reason for his inactivity is likely to be due a more attractive proposition, especially if

a hand, as it has become unusual for the good five card suit. Either way, the chances tract by two tricks (the ‘magic’ 200, out-

overcalling side to allow the opener to play that it is better to defend than declare will scoring any part-score). Conversely, non-

in his opening bid at the one level. have increased, so the protector need not vulnerable opponents need to be pushed

Successful defensive bidders will strain to strain to bid, and should keep his actions higher to gain significant reward, since

either push their opponents to a higher relatively sound. defeating a contract by two tricks still scores

level, or try and stop them declaring the In the cases where the protective bidder is less than making just 2♥ or 2♠.

hand. However, for this to be a successful short in the opponents’ suit, defensive pros-

strategy, a player bidding in the protective pects will be worse, unless partner has a

position should consider three factors: defensive holding in the opener’s suit. (If SUMMARY

a) The degree to which he is happy to high cards, there will be a reasonable chance DIRECT SEAT

b) The type of hand partner is likely to

that partner is hoping to penalise the open-

ing side). There will also be a greater prob-

• Be aggressive with shortage in the

have for his lack of action.

c) The likelihood of improving his side’s

ability that the reason that partner failed to

act was not a lack of high cards, but an un-

• Don’t be afraid to pass with length

in the opener’s suit – expect partner

score by bidding. attractive distribution, such as the example to ‘protect’ with shortage.

hand that you provided. Thus, it is now in

reasonable values, he should not bid simply

because the opponents have subsided at the

partner and make a bid even if we hold

• Look at your holding in the

opener’s suit, as well as general

one level, especially if this would entail a should make the same call that he would in strength and vulnerability.

distortion of his hand type. Thus, over-

calling should still be reserved for hands

the direct position, but should be prepared to

act with hands up to a king weaker than

• Consider the likelihood of improv-

ing your score by bidding.

with at least five cards in their longest suit.

However, take-out doubles and 1NT over-

normal – this is an important point for the

protector’s partner to accommodate at his

• Take sound actions with length in

calls can be made on more shaded values. A

next turn too. • Be prepared to act with shaded

values when holding shortage in

while a take-out double could be made with c) The chances that one’s score will be the opponent’s suit.

as little as Hand A. improved by a protective action incorpor-