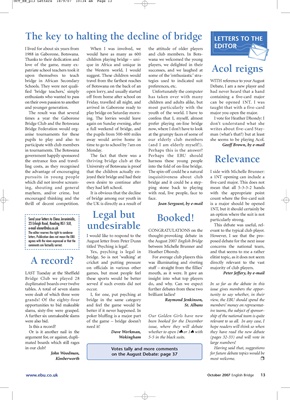 The key to halting the decline of bridge LETTERS TO THE

I lived for about six years from When I was involved, we the attitude of older players EDITOR

love of the game, many ex- que in Africa and unique in players, we delighted in their

upon themselves to teach

the Western world, I would

suggest. These children would

successes, and we laughed at

some of the ‘enthusiastic’ stra-

Schools. They were not quali- of Botswana on the back of an preferences, etc. Debate, I am a new player and

on their own passion to another Friday, travelled all night, and children and adults alike, but can be opened 1NT. I was

and younger generation. arrived in Gaborone ready to most particularly with the taught that with a five-card

The result was that several play bridge on Saturday morn- youth of the world. I have to major you open the major.

times a year the Gaborone ing. The lorries would leave confess that I, myself, almost I vote for Heather Dhondy: I

Bridge Club and the Botswana again on Sunday evening, after prefer playing on-line bridge don’t understand what she

Bridge Federation would org- a full weekend of bridge, and now, where I don’t have to look writes about five-card Stay-

anise tournaments for these the pupils from 500-600 miles at the grumpy faces of some of man (what’s that?) but at least

pupils to play and also to away would arrive home in our elderly club members she seems to be playing Acol.

participate with club members time to go to school by 7am on (and I am elderly myself!). Geoff Brown, by e-mail

in tournaments. The Botswana Monday. Perhaps this is the answer?

the entrance fees and travel-

ling costs, as they recognised

thriving bridge club at the

University of Botswana is proof

into the fold of on-line bridge.

the advantage of encouraging that the children actually en- The spin-off could be a natural I side with Michelle Brunner:

which did not involve scream- own desire to continue after bridge and it could be a step- five-card major. This does not

ing, shouting and general they had left school. ping stone back to playing mean that all 5-3-3-2 hands

mayhem, and/or crime, but It is obvious that the decline with real, live people, face to with the appropriate point

encouraged thinking and the of bridge among our youth in face. count where the five-card suit

thrill of decent competition. the UK is directly as a result of Joan Sergeant, by e-mail is a major should be opened

1NT, but it should certainly be

Send your letters to Elena Jeronimidis,

Legal but Booked! an option where the suit is not

The editor reserves the right to condense

undesirable CONGRATULATIONS on the

This debate was useful, rel-

evant to the typical club player.

letters. Publication does not mean the EBU I would like to respond to the thought-provoking debate in However, I see that the pro-

comments are factually correct. titled ‘Psyching is legal’. between Michelle Brunner and concerns the national team,

Yes, psyching is legal in Heather Dhondy. and that seems to me a rather

bridge. So is not ‘walking’ at For average club players this elitist topic, as it does not seem

A record? cricket and putting pressure

on officials in various other

was illuminating and riveting directly relevant to the vast

stuff – straight from the fillies’ majority of club players.

LAST Tuesday at the Sheffield games, but most people feel mouth, as it were. It gave an Peter Jeffery, by e-mail

duplimated boards over twelve served if such events did not do, and why. Can we expect In so far as the debate in this

were dealt of which three were I, for one, put psyching at brilliant ladies? tunity to say whether, in their

grands! Of the eighty-four bridge in the same category Raymond Jenkinson, view, the EBU should spend the

opportunities to bid makeable and feel the game would be St. Albans members’ money on representat-

slams, sixty-five were grasped. better if it never happened. In ive teams, the subject of sponsor-

were also bid. of the game – bridge doesn’t been booked for the December relevant to us all. In any case, I

Is this a record? need it! issue, where they will debate hope readers will think so when

Or is it another nail in the Dave Workman, whether to open 1♣ or 1♠ with they have read the new debate

in our club? Votes tally and more comments Having said that, suggestions

John Woodman, on the August Debate: page 37 for future debate topics would be