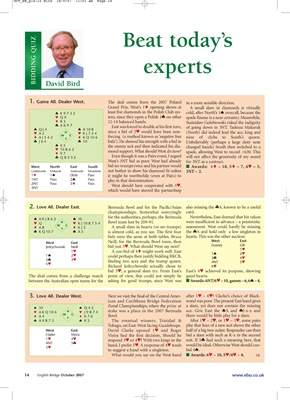 1. Game All. Dealer West. The deal comes from the 2007 Poland in a more sensible direction.

Grand Prix. West’s 1♦ opening shows at A small slam in diamonds is virtually

♠ K9732 least five diamonds in the Polish Club sys- cold, after North’s 1♠ overcall, because the

♥ Q9 tem, since they open a Polish 1♣ on other spade finesse is a near certainty. Meanwhile,

♣ AK97 East was forced to double at his first turn,

of going down in 3NT. Tadeusz Makaruk

♣ J64 ♣ 10 bids’). He showed his strength with a bid in Unbelievably (perhaps a large zloty note

mond support. What should West do now?

♣ Q8532 Even though it was a Pairs event, I regard will not affect the generosity of my award

West’s 3NT bid as poor. West had already for 3NT as a contract.

Golebiowski Makaruk Starkowski Niedzielski not bother to show his diamond fit unless 3NT – 2.

West should have cooperated with 3♥,

which would have steered the partnerhsip

2. Love All. Dealer East. Bermuda Bowl and for the Pacific/Asian also missing the ♣A, known to be a useful

for the authorities, perhaps, the Bermuda Nevertheless, East deemed that his values

♦ A8 S ♦ KJ3 A small slam in hearts (or no-trumps) assessment. West could hardly be missing

bids were the same at both tables. Bruce hearts. This was the other auction:

Neill, for the Bermuda Bowl team, then West East

bid just 3♥. What should West say next? Gosney Gill

The deal comes from a challenge match point of view, this could not simply be good hearts.

Zonal Championships, where the prize at a slam, yet does not contain the missing

Tobago, sat East-West facing Guadeloupe. play that four of a new suit shows the other

West East David Clarke opened 1♥ and Roger half of a big two-suiter. Responder can then

Clarke Vieira Vieira had the first decision, Should he bid a slam with such as K-x in the second

hand, I prefer 3♥. A response of 4♥ tends would be ideal. Otherwise West should cue-

to suggest a hand with a singleton. bid 4♠.