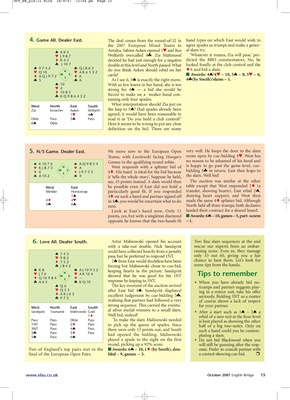 4. Game All. Dealer East. The deal comes from the round-of-32 in hand types on which East would wish to

♦ K43 decided he had just enough for a negative dicted the BBO commentators. No, he

♣ J 10 7 double at this level and North passed. What looked fondly at the club control and the

do you think Auken should rebid on her ♦A and bid a slam.

West North East South What interpretation should Zia put on

Zia Kovachev Auken Wolfarth the leap to 5♠? Had spades already been

1♥ 4♣ agreed, it would have been reasonable to

Dble Pass 5♠ Pass read it as ‘Do you hold a club control?’

definition on the bid. There are many

5. N/S Game. Dealer East. We move now to the European Open very well. He keeps the door to the slam

Gamax in the qualifying round robin. no reason to be ashamed of his hand and

♥ KJ873 N ♥ A West responds with a splinter bid of is happy to go past the game-level, cue-

say, 15 points instead. A slam would then The auction was similar at the other

1♠ 4♦ on such a hand and partner signed off denying heart support, and West then

Look at East’s hand now. Only 11 landed their contract for a shared board.

opposite he knows that the two hands fit – 1.

with a take-out double. Nick Sandqvist rescue our experts from an embar-

could have collected heavily from a penalty rassing score. Even so, they manage

♦ 752 2♠ from East would doubtless have been chance to beat them. Let’s look for

♣ J842 forcing but Malinowski chose to cue-bid, some tips from the hands.

showed that he was good for his 1NT Tips to remember

response by leaping to 3NT.

The key moment of the auction arrived

• When you have already bid no-

strong sequence. This carried the eventu- for your partner.

rebid of a new suit at the four-level

1NT Pass 2♦ Pass to pick up the queen of spades. Since half of a big two-suiter. Only on

3NT Pass 4♠ Pass there were only 13 points out, and South

such a hand could you be contem-

had opened the bidding, Malinowski plating a slam.

played a spade to the eight on the first

• Do not bid Blackwood when you

will still be guessing after the resp-