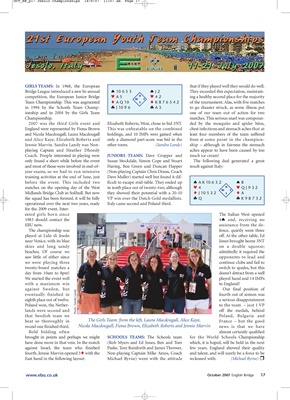 GIRLS TEAMS: In 1968, the European that if they played well they would do well.

♥42 ing a healthy second place for the majority

Team Championship. This was augmented ♦ A Q 10 S ♦K876542 of the tournament. Alas, with five matches

2007 was the third Girls event and Elizabeth Roberts, West, chose to bid 3NT. ded by the mosquito and spider bites,

and Nicola Macdougall, Laura Macdougall holdings, and 10 IMPs were gained when least four members of the team suffered

and Alice Kaye, Elizabeth Roberts and only a diamond part-score was bid in the from at some point in the champion-

Jennie Marvin. Sandra Landy was Non- other room. (Sandra Landy) ship – although in fairness the stomach

only found a short while before the event Susan Stockdale, Simon Cope and Stuart The following deal generated a great

and most of those were involved in end-of- Haring, Ben Green and Duncan Happer result against Italy:

year exams, so we had to run intensive (Non-playing Captain Chris Dixon, Coach

training activities at the end of June, just Dave Muller) started well but found it dif-

matches on the opening day of the West in tenth place out of twenty-two, although ♥4 W

the squad has been formed, it will be fully VP win over the Dutch Gold medallists. ♣Q ♣K98732

operational over the next two years, ready Italy came second and Poland third.

EBU now. assistance from the de-

played at Lido di Jesolo off. At the other table, Ed

near Venice, with its blue Jones brought home 3NT

skies and long sandy on a double squeeze;

beaches. Of course we admittedly it required the

saw little of either since opponents to lead and

we were playing three continue clubs and fail to

twenty-board matches a switch to spades, but this

day from 10am to 8pm! doesn’t detract from a well

We started the event well played hand and 14 IMPs

with a maximum win to England!

against Sweden, but Our final position of

eventually finished in fourth out of sixteen was

eighth place out of twelve. a serious disappointment

Poland won, the Nether- to the team – just 1 VP

lands were second and off the medals, behind

that Swedish team we Poland, Bulgaria and

beat so thoroughly in The Girls Team: from the left, Laura Macdougall, Alice Kaye, France – but the good

round one finished third. Nicola Macdougall, Fiona Brown, Elizabeth Roberts and Jennie Marvin news is that we have

brought in points and perhaps we might SCHOOLS TEAMS: The Schools team for the World Schools Championship

have done more in that vein. In the match (Rob Myers and Ed Jones, Ben and Tom which, it is hoped, will be held in the next

fourth, Jennie Marvin opened 3♦ with the Non-playing Captain Mike Amos, Coach and talent, and will surely be a force to be