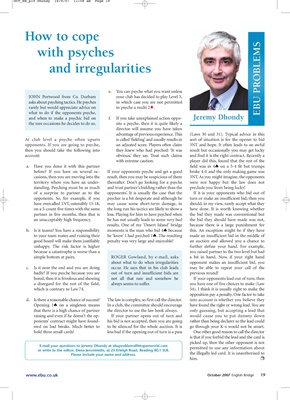 e. You can psyche what you want unless

JOHN Portwood from Co. Durham your club has decided to play Level 3,

asks about psyching tactics. He psyches in which case you are not permitted

rarely but would appreciate advice on to psyche a multi 2♦.

what to do if the opponents psyche,

and when to make a psychic bid on f. If you take unexplained action oppo- Jeremy Dhondy

the rare occasions he decides to do so. site a psyche, then it is quite likely a

director will assume you have taken

advantage of previous experience. This (Laws 30 and 31). Typical advice in this

opponents. If you are going to psyche, an adjusted score. Players often claim 3NT and hope. It often leads to an awful

then you should take the following into they knew who had psyched: ‘It was result but occasionally you may get lucky

account: obvious,’ they say. Treat such claims and find it is the right contract. Recently a

with extreme caution. player did this, found that the rest of the

a. Have you done it with this partner field was in 4♠ on a 5-4 fit but trumps

before? If you have on several oc- If your opponents psyche and get a good broke 4-0 and the only making game was

casions, then you are moving into the result, then you may be suspicious of them 3NT. As you might imagine, the opponents

territory where you have an under- thereafter. Don’t go looking for a psyche were not happy but the law does not

standing. Psyching must be as much and trust partner’s bidding rather than the preclude you from being lucky!

of a surprise to partner as to the opponents’. It is usually the case that the If it is your opponents who bid out of

opponents. So, for example, if you psycher is a bit desperate and although he turn or make an insufficient bid, then you

have overcalled 1NT, ostensibly 15-18, may cause some short-term damage, in should, in my view, rarely accept what they

on a 5-count five times with the same the long run his tactics are likely to show a have done. It is worth knowing whether

partner in five months, then that is loss. Playing for him to have psyched when the bid they made was conventional but

an unacceptably high frequency. he has not usually leads to some very bad the bid they should have made was not,

results. One of my ‘Desert Island’ bridge because there is a large punishment for

b. Is it teams? You have a responsibility moments is the man who bid 4♠ because this. An exception might be if they have

to your team mates and ruining their he ‘knew’ I had psyched 1♠. The resulting made an insufficient bid in the middle of

good board will make them justifiably penalty was very large and enjoyable! an auction and allowed you a chance to

unhappy. The risk factor is higher further define your hand. For example,

simple bottom at pairs. ROGER Gowland, by e-mail, asks a bit in hand. Now, if your right hand

about what to do when irregularities opponent makes an insufficient bid, you

c. Is it near the end and you are doing occur. He says that in his club leads may be able to repeat your call of the

badly? If you psyche because you are out of turn and insufficient bids are previous round!

bored, then it is frivolous and showing not all that rare and somehow he If your opponents lead out of turn, then

a disregard for the rest of the field, always seems to suffer. you have one of five choices to make (Law

opposition pay a penalty. One factor to take

d. Is there a reasonable chance of success? The law is complex, so first call the director. into account is whether you believe they

Opening 1♠ on a singleton means In a club, the committee should encourage have found the right or wrong lead. You are

that there is a high chance of partner the director to use the law book always. only guessing, but accepting a lead that

ponents’ contract might have found- his bid is not accepted, then you are going rather than being declarer so the lead could

ered on bad breaks. Much better to to be silenced for the whole auction. It is go through your K-x would not be smart.

hold three small cards! less bad if the opening out of turn is a pass One other good reason to call the director

is that if you forbid the lead and the card is

picked up, then the other opponent is not

permitted to use any information about

Please include your name and address. the illegally led card. It is unauthorised to