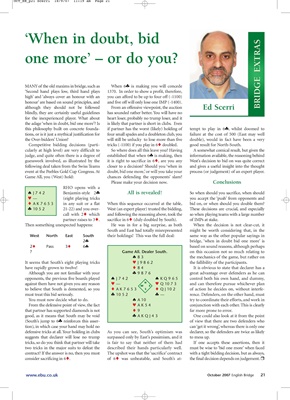 ‘When in doubt, bid

MANY of the old maxims in bridge, such as When 6♣ is making you will concede

honour’ are based on sound principles, and and five off will only lose one IMP (-1400).

although they should not be followed From an offensive viewpoint, the auction Ed Scerri

blindly, they are certainly useful guidelines has sounded rather better. You will have no

for the inexperienced player. What about heart loser, probably no trump loser, and it

the adage ‘when in doubt, bid one more’? Is is likely that partner is short in clubs. Even

this philosophy built on concrete founda- if partner has the worst (likely) holding of tempt to play in 6♣, whilst doomed to

tions, or is it just a mythical justification for four small spades and a doubleton club, you failure at the cost of 500 (East may well

the Over-bidders’ Union? will still be unlucky to lose more than five double), would in fact have been a very

cularly at high level) are very difficult to So where does all this leave you? Having A somewhat comical result, but given the

judge, and quite often there is a degree of established that when 6♣ is making, then information available, the reasoning behind

guesswork involved, as illustrated by the it is right to sacrifice in 6♦, are you any West’s decision to bid on was quite correct

following deal taken from the Swiss Teams closer to a decision? Should you ‘when in and gives a useful insight into the thought

event at the Peebles Gold Cup Congress. At doubt, bid one more,’ or will you take your process (or judgement) of an expert player.

Game All, you (West) hold: chances defending the opponents’ slam?

RHO opens with a

♠J742 Benjamin-style 2♣ All is revealed! So when should you sacrifice, when should

♥— (eight playing tricks you accept the ‘push’ from opponents and

♦AK7653 in any suit or a flat When this sequence occurred at the table, bid on, or when should you double them?

call with 2♦ which and following the reasoning above, took the so when playing teams with a large number

partner raises to 3♦. sacrifice in 6♦ (duly doubled by South). of IMPs at stake.

Then something unexpected happens: He was in for a big surprise, as both When the decision is not clear-cut, it

South and East had totally misrepresented might be worth considering that, in the

West North East South their holdings! This was the full deal: same way as the other popular sayings in

2♦ Pass 3♦ 6♣ based on sound reasons, although perhaps

? Game All. Dealer South. on this occasion not so much relating to

♠83 the mechanics of the game, but rather on

It seems that South’s eight playing tricks ♥J9862 the fallibility of the participants.

have rapidly grown to twelve! ♦84 It is obvious to state that declarer has a

opponents, the previous five boards played ♠ J742 ♠KQ965 control both his own hand, and dummy,

against them have not given you any reason ♥ — W E

You must now decide what to do. ♠ A 10 try to coordinate their efforts, and work in

From the defensive point of view, the fact ♥AK54 conjunction with each other. This is clearly

that partner has supported diamonds is not ♦9 far more prone to error.

good, as it means that South may be void ♣AKQJ43 One could also look at it from the point

tion), in which case your hand may hold no can ‘get it wrong’, whereas there is only one

defensive tricks at all. Your holding in clubs As you can see, South’s optimism was declarer, so the defenders are twice as likely

suggests that declarer will lose no trump surpassed only by East’s pessimism, and it to mess up.

tricks, so do you think that partner will take is fair to say that neither of them had If one accepts these assertions, then it

two tricks in the major suits to defeat the described their hands particularly well. must be wise to ‘bid one more’ when faced

contract? If the answer is no, then you must The upshot was that the ‘sacrifice’ contract with a tight bidding decision, but as always,

consider sacrificing in 6♦. of 6♦ was unbeatable, and South’s at- the final decision depends on judgement.