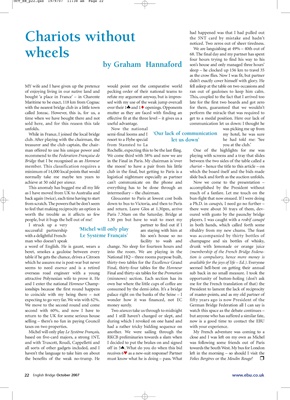 Chariots without had happened was that I had pulled out

the 5NT card by mistake and hadn’t

68. The final day and my partner has spent

four hours trying to find his way to his

by Graham Hannaford son’s house and only managed three hours’

as the crow flies. Now I was fit, but partner

didn’t exactly cover himself with glory. He

of enjoying living in our native land and pecking order of their national teams to ran out of gauloises to keep him calm.

bought ‘a place in France’ – in Charente refute my argument anyway, but is impres- This, coupled to the fact that I arrived too

Maritime to be exact, 118 km from Cognac sed with my use of the weak jump overcall late for the first two boards and got zero

with the nearest bridge club in a little town over their 1♣ and 1♦ openings. Opponents for them, guaranteed that we wouldn’t

called Jonzac. However, this is, for us, a mutter as they are faced with finding an perform the miracle that was required to

time when we have bought there and not effective fit at the three level – it gives us a get to a medal position. Here our lack of

sold here, and for this reason this tale useful advantage. communication let us down: I thought he

unfolds. Now the national was picking me up from

While in France, I joined the local bridge semi-final looms and I ‘Our lack of communication my hotel, he was sure

club. After playing with the chairman, the resort to a Flybe special let us down’ he had told me: ‘See

treasurer and the club captain, the chair- from Stansted to La you at the club.’

man offered to use his unique power and Rochelle, expecting this to be the last fling. One of the highlights for me was

Bridge that I be recognised as an Honneur in the Final in Paris. My chairman is ‘over between the two sides of the table called a

member. This classification requires a the moon’ to have a pair from his little chariot – hence the title to this article – on

minimum of 14,000 local points that would club in the final, but getting to Paris is a which the board itself and the bids made

normally take me maybe ten years to logistical nightmare especially as partner slide back and forth as the auction unfolds.

achieve at 50 odd per séance. can’t communicate on the phone and Now we come to the presentation –

as I have moved from UK to Australia and intermediary – the chairman. much of a fanfare. Let me touch on the

back again (twice), each time having to start Gloucester to Paris at lowest cost boils bun-fight that now ensued. If I were doing

from scratch. The powers that be don’t seem down to bus to Victoria, and then to Paris a Ph.D. in canapés, I need go no further –

to feel that making reciprocity an option is and return. Leave Glos at 1.30pm, arrive there were about 50 trays of them, dev-

worth the trouble as it affects so few Paris 7.30am on the Saturday. Bridge at oured with gusto by the paunchy bridge

people, but it bugs the hell out of me! 1.30 pm but have to wait to meet my players. I was caught with a rosbif canapé

I struck up a very partner to find out if I in both hands, which called forth some

successful partnership ‘Michel will only play am staying with him at ribaldry from my new chums. The feast

man who doesn’t speak facility to wash and champagne and six bottles of whisky,

a word of English. He is gaunt, wears a change. No sleep for fourteen hours and drunk with lemonade or orange juice

beret, smokes a gauloise between every into the room. We are playing in the (membership of the French Bridge Federa-

table if he gets the chance, drives a Citroen National HQ – three rooms purpose built, tion is compulsory, hence more money is

which he assures me is post-war but never thirty-two tables for the Excellence Grand available for the joys of life – Ed.). Everyone

seems to need essence and is a retired Final, thirty-four tables for the Honneur seemed hell-bent on getting their annual

overseas road engineer with a young Final and thirty-six tables for the Promotion sub back in no small measure. I took the

attractive Polynesian wife to prove it. He (minnows) section. Each section has its opportunity of button-holing (don’t ask

ionships because the first round happens consumed by the demi-john. It’s a bridge President to lament the lack of reciprocity

to coincide with my being there – not palace right on the banks of the Seine – I of master-points, and as my old partner of

expecting to go very far. We win with 62%. wonder how it was financed, not EC fifty years ago is now President of the

We move to the second round and come money surely. German Bridge Federation all I can say is

second with 60%, and now I have to Two séances take us through to midnight watch this space as the debate continues –

return to the UK for some serious house and I still haven’t changed or slept, and but anyone who has suffered a similar fate,

taxes on two properties. had a rather tricky bidding sequence on with your experience.

Michel will only play Le Système Français, another. We were sailing through the My French adventure was coming to a

based on five-card majors, a strong 1NT, RKCB preliminaries towards a slam when close and I was left on my own as Michel

and with Truscott, Roudi, Cappelletti and I decided to put the brakes on and signed was following some friends out of Paris

all sorts of other gadgets included, and I off in 5♠. What do you do when this bid towards the South West. My bus for London

haven’t the language to take him on about receives 6♥ as a new-suit response? Partner left in the morning – so should I visit the

the benefits of the weak no-trump. He must know what he is doing – pass. What Folies Bergères or the Moulin Rouge?