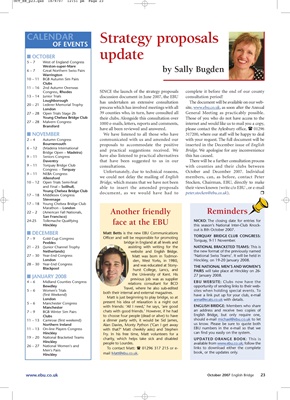 Congress, Rhodes SINCE the launch of the strategy proposals complete it before the end of our county

London process which has involved meetings with all site, www.ebu.co.uk, as soon after the Annual

27 – 28 Open Trials Stage 2b 39 counties who, in turn, have consulted all General Meeting as practicably possible.

Young Chelsea Bridge Club their clubs. Alongside this consultation over Those of you who do not have access to the

1000 e-mails, letters, reports and comments, internet and would like us to mail you a copy,

have all been reviewed and answered. please contact the Aylesbury office, 01296

■ NOVEMBER We have listened to all those who have 317200, where our staff will be happy to deal

2–4 Autumn Congress communicated with us and amended our with your request. The full document will be

and practical suggestions received. We Bridge. We apologise for any inconvenience

9 – 11 Seniors Congress have also listened to practical alternatives this has caused.

9 – 11 Torquay Bridge Club consultations. with counties and their clubs between

Unfortunately, due to technical reasons, October and December 2007. Individual

10 – 12 Open Trials Semi-final Bridge, which means that we have not been Stocken, Chairman, EBU, directly to make

document, as we would have had to peter.stocken@ebu.co.uk).

Hinckley face at the EBU NICKO: The closing date for entries for

bridge in England at all levels and Torquay, 9-11 November.

21 – 23 (Junior Channel Trophy assisting with writing for the NATIONAL BRACKETED TEAMS: This is

Netherlands) website and English Bridge. the new format of the previously named

27 – 30 Year-End Congress Matt was born in Todmor- ‘National Swiss Teams’. It will be held in

Blackpool hurst College, Lancs, and PAIRS will take place at Hinckley on 26-

the University of Kent. His

■ JANUARY 2008 previous job was as supplier

Bewdley opportunity of sending links to their web-

Travel, where he also sub-edited

both their internal and external magazines.

(first Weekend) have a link put up for your club, e-mail

London Matt is just beginning to play bridge, so at

Manchester with friends: ‘All I need,’ he says, ‘are good ENGLISH BRIDGE: Members who share

7–9 BGB Winter Sim Pairs chats with good friends.’ However, if he had an address and receive two copies of

Clubs to choose four people (dead or alive) to have English Bridge, but only require one,

11 – 13 Camrose (first weekend) a dinner party with, it would be Sid James, should e-mail michael@ebu.co.uk to let

Northern Ireland Alan Davies, Monty Python (‘Can I get away us know. Please be sure to quote both

11 – 13 On-line Players Congress with that?’ Matt cheekily asks) and Stephen EBU numbers in the e-mail so that we

Hinckley Fry. In his free time, Matt volunteers for a can find you easily on the system.

Hinckley people to Lourdes. available from www.ebu.co.uk; follow the

mail Matt@ebu.co.uk. book, or the updates only.