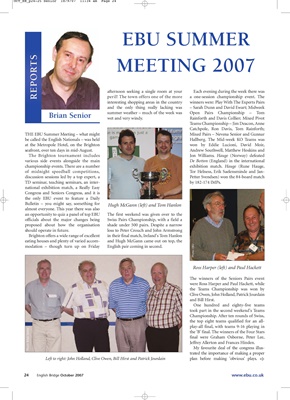 peril! The town offers one of the more a one-session championship event. The

interesting shopping areas in the country winners were: Play With The Experts Pairs

and the only thing really lacking was – Sarah Dunn and David Ewart; Midweek

summer weather – much of the week was Open Pairs Championship – Tom

be called the English Nationals – was held Hallberg. The Mid-week KO Teams was

at the Metropole Hotel, on the Brighton won by Eddie Lucioni, David Moir,

discussion sessions led by a top expert, a Petter Svendsen) won the 84-board match

Congress and Seniors Congress, and it is

the only EBU event to feature a Daily

Bulletin – you might say, something for Hugh McGann (left) and Tom Hanlon

almost everyone. This year there was also

officials about the major changes being Swiss Pairs Championship, with a field a

proposed about how the organisation shade under 500 pairs. Despite a narrow

should operate in future. loss to Peter Crouch and John Armstrong

eating houses and plenty of varied accom- and Hugh McGann came out on top, the

modation – though turn up on Friday English pair coming in second.

The winners of the Seniors Pairs event

were Ross Harper and Paul Hackett, while

the Teams Championship was won by

One hundred and eighty-five teams

Championship. After ten rounds of Swiss,

the top eight teams qualified for an all-

play-all final, with teams 9-16 playing in

the 'B' final. The winners of the Four Stars

My favourite deal of the congress illus-

trated the importance of making a proper