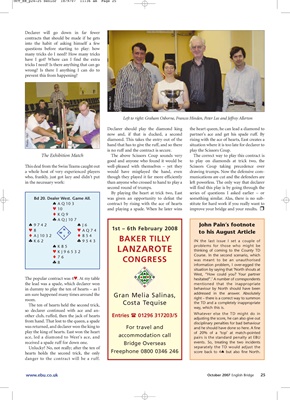 Declarer will go down in far fewer

contracts that should be made if he gets

into the habit of asking himself a few

questions before starting to play: how

have I got? Where can I find the extra

tricks I need? Is there anything that can go

wrong? Is there I anything I can do to

prevent this from happening?

Declarer should play the diamond king the heart queen, he can lead a diamond to

now and, if that is ducked, a second partner's ace and get his spade ruff. By

diamond. This takes the entry out of the rising with the ace of hearts, East creates a

hand that has to give the ruff, and so there situation where it is too late for declarer to

is no ruff and the contract is secure. play the Scissors Coup.

good and anyone who found it would be to play on diamonds at trick two, the

a whole host of very experienced players would have misplayed the hand, even drawing trumps. Now the defensive com-

who, frankly, just got lazy and didn't put though they played it far more efficiently munications are cut and the defenders are

in the necessary work: than anyone who crossed to hand to play a left powerless. The only way that declarer

second round of trumps. will find this play is by going through the

By playing the heart at trick two, East series of questions I asked earlier – or

Bd 20. Dealer West. Game All. was given an opportunity to defeat the something similar. Alas, there is no sub-

♥ 10 and playing a spade. When he later wins improve your bridge and your results.

W E to his August Article

♥KJ96532 LANZAROTE thinking of coming to the County TD

Course. In the second scenario, which

♣8 CONGRESS was meant to be an unauthorised

information problem, I over-egged the

situation by saying that ‘North shouts at

West, “How could you? Your partner

The popular contract was 4♥. At my table hesitated”.’ A number of correspondents

the lead was a spade, which declarer won mentioned that the inappropriate

addressed in the answer. Absolutely

am sure happened many times around the Gran Melia Salinas, right – there is a correct way to summon

The ten of hearts held the second trick, Costa Tequise the TD and a completely inappropriate

way, which this is.

so declarer continued with ace and an-

from hand. That lost to the queen, a spade disciplinary penalties for bad behaviour

was returned, and declarer won the king to For travel and and he should have done so here. A fine

play the king of hearts. East won the heart of 20% of a ‘top’ at match-pointed

ace, led a diamond to West's ace, and accommodation call pairs is the standard penalty at EBU

received a spade ruff for down one. Bridge Overseas events. So, treating the two incidents

Unlucky? No, not really; after the ten of separately the TD would adjust the

danger to the contract will be a ruff.