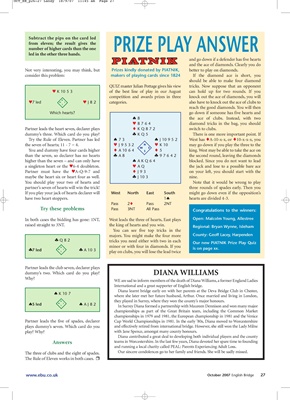 Subtract the pips on the card led

from eleven; the result gives the

number of higher cards than the one

led in the other three hands.

and go down if a defender has five hearts

and the ace of diamonds. Clearly you do

Not very interesting, you may think, but Prizes kindly donated by PIATNIK, better to play on diamonds.

consider this problem: makers of playing cards since 1824 If the diamond ace is short, you

should be able to make four diamond

competition and awards prizes in three knock out the ace of diamonds, you will

E ♥J82 categories. also have to knock out the ace of clubs to

reach the good diamonds. You will then

Which hearts? go down if someone has five hearts and

dummy’s three. Which card do you play? ♣ KQ5 There is one more important point. If

than the seven, so declarer has no hearts ♣ A8 ♣ 97642 the second round, leaving the diamonds

higher than the seven – and can only have ♠ AKQ64 blocked. Since you do not want to lead

a singleton heart or the ♥6-4 doubleton. ♥ AQ the jack and lose to a possible bare ace

partner’s seven of hearts will win the trick! three rounds of spades early. Then you

Try these problems Pass 3NT All Pass Congratulations to the winners:

In both cases the bidding has gone: 1NT, West leads the three of hearts, East plays Open: Malcolm Young, Allestree

raised straight to 3NT. the king of hearts and you win. Regional: Bryan Wynne, Isleham

You can see five top tricks in the

N minor or with four in diamonds. If you is on page xx.

dummy’s two. Which card do you play? DIANA WILLIAMS

Why? WE are sad to inform members of the death of Diana Williams, a former England Ladies

International and a great supporter of English bridge.

Diana learnt bridge early on with her parents at the Deva Bridge Club in Chester,

♠ K 10 7 where she later met her future husband, Arthur. Once married and living in London,

N they played in Surrey, where they won the county’s major honours.

championships as part of the Great Britain team, including the Common Market

Partner leads the five of spades, declarer Cup World Championships in 1981. In the early ’80s, Diana moved to Worcestershire

plays dummy’s seven. Which card do you and effectively retired from international bridge. However, she still won the Lady Milne

play? Why? with Jane Spence, amongst many county honours.

Answers teams in Worcestershire. In the last few years, Diana devoted her spare time to founding

The three of clubs and the eight of spades. Our sincere condolences go to her family and friends. She will be sadly missed.

The Rule of Eleven works in both cases.