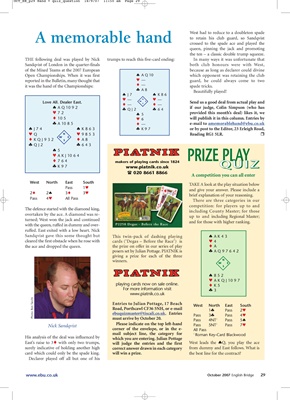 West had to reduce to a doubleton spade

to retain his club guard, so Sandqvist

crossed to the spade ace and played the

queen, pinning the jack and promoting

THE following deal was played by Nick trumps to reach this five-card ending: In many ways it was unfortunate that

Sandqvist of London in the quarter-finals both club honours were with West,

Open Championships. When it was first ♠ A Q 10 which opponent was retaining the club

reported in the Bulletin, many thought that ♥ — guard, he could always come to two

it was the hand of the Championships: ♦ — spade tricks.

Send us a good deal from actual play and

A competition you can all enter

TAKE A look at the play situation below

and give your answer. Please include a

brief explanation of your reasoning.

There are three categories in our

The defence started with the diamond king, including County Master; for those

overtaken by the ace. A diamond was re- up to and including Regional Master;

turned; West won the jack and continued and for those with higher ranking.

with the queen, ruffed in dummy and over-

the ace and dropped the queen. the prize on offer in our series of play ♦ A

giving a prize for each of the three

corner of the envelope, or in the e- All Pass

mail subject line, the category for 1

His analysis of the deal was influenced by which you are entering. Julian Pottage

East’s raise to 3♦ with only two trumps, will judge the entries and the first West leads the ♠Q, you play the ace

surely indicative of holding another high correct answer drawn in each category from dummy and East follows. What is

card which could only be the spade king. will win a prize. the best line for the contract?

Declarer played off all but one of his