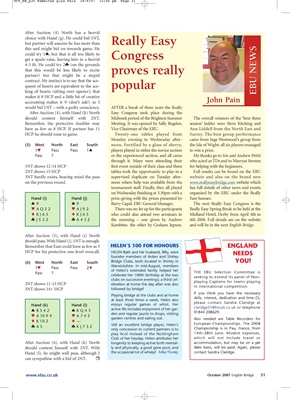 After Auction (4) North has a horrid

but partner will assume he has more than Really Easy

could try 1♠, but that is all too likely to

get a spade raise, leaving him in a horrid

that this would be less likely to excite

contract. My instinct is to say that the ace-

queen of hearts are equivalent to the ace-

king of hearts (sitting over opener); that

makes it 8 HCP and a little bit of creative

accounting makes it 9 (don’t ask!) so I John Pain

would bid 1NT – with a guilty conscience. AFTER a break of three years the Really

After Auction (4), with Hand (h) North Easy Congress took place during the

should content himself with 2NT. Midweek period of the Brighton Summer The overall winners of the ‘best three

Remember, the protective doubler may Meeting. It was opened by Sally Bugden, session’ ladder were Steve Kitching and

have as few as 8 HCP. If partner has 11 Vice Chairman of the EBU. Ann Liddell from the North East and

HCP he should raise to game. Twenty-one tables played from Surrey. The best group performance

(5) West North East South noon. Fortified by a glass of sherry, the Isle of Wight: all six players managed

1♥ Pass Pass 1♠ players played in either the novice section to win a prize.

Pass ? or the experienced section, and all came My thanks go to Iris and Andrew Pettit

through it. Many were attending their who acted as TDs and to Marryat Stevens

1NT shows 12-14 HCP first event outside of their class and three for helping with the beginners.

3NT hardly exists, bearing mind the pass supervised duplicate on Tuesday after- website and also on the brand new

on the previous round. noon where help was available from the www.reallyeasybridge.com website which

tournament staff. Finally, they all played has full details of other news and events

on Wednesday finishing at 3.30pm with a organised by the EBU under the Really

Hand (i) Hand (j) prize-giving with the prizes presented by Easy banner.

♠9 ♠ 9 Barry Capal, EBU General Manager. The next Really Easy Congress is the

♦KJ65 ♦ KJ65 who could also attend two seminars in Midland Hotel, Derby from April 4th to

Kambites. the other by Graham Jepson. and will be in the next English Bridge.

HCP for his protective one-level overcall. HELEN Bath and her husband, Billy, were

founder members of Arden and Shirley

(6) West North East South Bridge Clubs, both located in Shirley in YOU!

Pass ? celebrate her 100th birthday at the two

seeking to extend its panel of Non-

If you think you have the necessary

Playing bridge at the clubs and at home

active life includes enjoyment of her gar- claridge31@tiscali.co.uk or telephone

garden centres and eating out. Also needed are Table Recorders for

only concession to current partners is to

play Acol instead of the Nottingham 14th-28th June. Modest expenses,

Club of her heyday. Helen attributes her which will not include travel or

After Auction (6), with Hand (k) North longevity to keeping active both mental- accommodation, but may be on a per

should content himself with 2NT. With ly and physically, a good gene pool, and diem basis, will be paid. Again, please

Hand (l), he might well pass, although I the occasional tot of whisky! Mike Thorley contact Sandra Claridge.

can sympathise with a bid of 2NT.