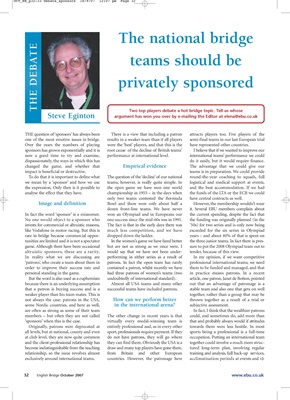 Steve Eginton argument has won you over by e-mailing the Editor at elena@ebu.co.uk

THE question of ‘sponsors’ has always been There is a view that including a patron attracts players too. Five players of the

one of the most emotive issues in bridge. results in a weaker team than if all players semi-final teams in our last European trial

Over the years the numbers of playing were the ‘best’ players, and that this is the have represented other countries.

dispassionately, the ways in which this has do it easily, but it would require finance.

changed the game, and whether that Empirical evidence The advantage that we could give our

impact is beneficial or destructive. teams is in preparation. We could provide

To do that it is important to define what The question of the ‘decline’ of our national round-the-year coaching to squads, full

we mean by a ‘sponsor’ and how we use teams, however, is really quite simple. In logistical and medical support at events,

the expression. Only then is it possible to the open game we have won one world and the best accommodation. If we had

analyse the effect that they have. championship in 1955 – in the days when the funds of the LTA or the ECB we could

only two teams contested the Bermuda have central contracts as well.

Image and definition Bowl and there were only about half a However, the membership wouldn’t wear

dozen front-line teams. We have never it. Several EBU members complain about

In fact the word ‘sponsor’ is a misnomer. won an Olympiad and in Europeans our the current spending, despite the fact that

No one would object to a sponsor who one success since the mid-60s was in 1991. the funding was originally planned (in the

invests for commercial or altruistic reasons, The fact is that in the early days there was ’50s) for two series and is only now being

like Vodafone in motor racing. But this is much less competition, and we have exceeded for the six series in Olympiad

rare in bridge because commercial oppor- dropped down the ladder. years – and about 40% of that is spent on

tunities are limited and it is not a spectator In the women’s game we have fared better the three junior teams. In fact there is pres-

game. Although there have been occasional but are not as strong as we once were. I sure to put the 2008 Olympiad team out to

altruistic sponsors, these are a rarity. would say that we have not been under- tender, because of this view.

In reality what we are discussing are performing in either series as a result of In my opinion, if we want competitive

‘patrons’, who create a team about them in patrons. In fact the open team has rarely professional international teams, we need

order to improve their success rate and contained a patron, whilst recently we have them to be funded and managed, and that

personal standing in the game. had three patrons of women’s teams (two in practice means patrons. In a recent

But the word is also used as a euphemism undoubtedly of international standard). article, one patron, Janet de Botton, pointed

that a patron is buying success and is a successful teams have included patrons. stable team and also one that gets on well

weaker player than his team mates. This is together, rather than a group that may be

not always the case: patrons in the USA, How can we perform better thrown together as a result of a trial or

some Nordic countries, and here as well, in the international arena? subjective assessment.

are often as strong as some of their team In fact, I think that the wealthier patrons

members – but often they are not called The other change in recent years is that could, and sometimes do, add more than

‘sponsors’ when this is the case. virtually every medal-winning team is that and probably always would if attitudes

Originally, patrons were deprecated at entirely professional and, as in every other towards them were less hostile. In most

all levels, but at national, county and even sport, professionals require payment. If they sports being a professional is a full-time

at club level, they are now quite common do not have patrons, they will go where occupation. Putting an international team

and the client-professional relationship has they can find them. Obviously the USA is a together could involve a much more struc-

become indistinguishable from the teaching draw and many top players have gone there, tured long-term plan, involving regular

relationship, so the issue revolves almost from Britain and other European training and analysis, full back-up services,

exclusively around international teams. countries. However, the patronage here acclimatisation periods at events and