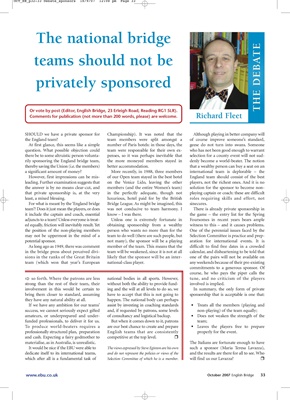 teams should not be

Comments for publication (not more than 200 words, please) are welcome. Richard Fleet

SHOULD we have a private sponsor for Championship). It was noted that the Although playing in better company will

the England team? team members were split amongst a of course improve someone’s standard,

At first glance, this seems like a simple number of Paris hotels: in those days, the geese do not turn into swans. Someone

question. What possible objection could team were responsible for their own ex- who has not been good enough to warrant

there be to some altruistic person volunta- penses, so it was perhaps inevitable that selection for a county event will not sud-

thereby saving the Union (i.e. the members) better accommodation. that a wealthy person can buy a seat on an

a significant amount of money? More recently, in 1988, three members international team is deplorable – the

However, first impressions can be mis- of our Open team stayed in the best hotel England team should consist of the best

leading. Further examination suggests that on the Venice Lido, leaving the other players, not the richest ones. And it is no

the answer is by no means clear-cut, and members (and the entire Women’s team) solution for the sponsor to become non-

that private sponsorship is, at the very in the perfectly adequate, though not playing captain or coach: these are difficult

least, a mixed blessing. luxurious, hotel paid for by the British roles requiring skills and effort, not

For what is meant by the ‘England bridge Bridge League. As might be imagined, this sinecures.

team’? Does it just mean the players, or does was not conducive to team harmony. I There is already private sponsorship in

it include the captain and coach, essential know – I was there. the game – the entry list for the Spring

adjuncts to a team? Unless everyone is treat- Unless one is extremely fortunate in Foursomes in recent years bears ample

ed equally, friction will inevitably result. Yet obtaining sponsorship from a wealthy witness to this – and it causes problems.

may not be uppermost in the mind of a team to do well (there are such people, but Selection Committee is practice and prep-

potential sponsor. not many), the sponsor will be a playing aration for international events. It is

As long ago as 1949, there was comment member of the team. This means that the difficult to find free dates in a crowded

in the bridge press about perceived divi- team will be weakened, since it is not at all calendar, and disheartening to be told that

team (which won that year’s European national-class player. any weekends because of their pre-existing

commitments to a generous sponsor. Of

course, he who pays the piper calls the

so forth. Where the patrons are less national bodies in all sports. However, tune, and no criticism of the players

strong than the rest of their team, their without both the ability to provide fund- involved is implied.

involvement in this would be certain to ing and the will at all levels to do so, we In summary, the only form of private

bring them closer to standard, assuming have to accept that this is not going to sponsorship that is acceptable is one that:

they have any natural ability at all. happen. The national body can perhaps

success, we cannot seriously expect gifted and, if requested by patrons, some levels non-playing) of the team equally;

amateurs, or underprepared and under- of consultancy and logistical backup. • Does not weaken the strength of the

funded professionals, to deliver it for us. But when it comes down to it, patrons team;

professionally structured plan, preparation English teams that are consistently properly for the event.

and cash. Expecting a fairy godmother to competitive at the top level.

materialise, as in Australia, is unrealistic. The Italians are fortunate enough to have

It would be nice if the EBU were able to The views expressed by Steve Eginton are his own such a sponsor (Maria Teresa Lavazza),

dedicate itself to its international teams, and do not represent the policies or views of the and the results are there for all to see. Who

which after all is a fundamental task of Selection Committee of which he is a member. will find us our Lavazza?