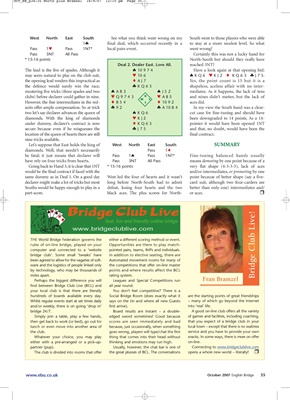 1♣ final deal, which occurred recently in a to stay at a more modest level. So what

* 15-16 points North-South but should they really have

the opening lead renders this impractical as ♦AJ7 Yes, the point count is 15 but it is a

the defence would surely win the race, ♣KQ63 shapeless, aceless affair with no inter-

mustering five tricks (three spades and two ♠ A83 ♠ J52 mediates. As it happens, the lack of tens

clubs) before declarer could gather in nine. ♥ Q9743

diamonds. With the king of diamonds ♥KJ2 been downgraded to 14 points. As a 14-

under dummy, declarer’s contract is now ♦KQ63 pointer it would have been opened 1NT

secure because even if he misguesses the ♣J75 and that, no doubt, would have been the

location of the queen of hearts there are still final contract.

have rely on four tricks from hearts. Pass 3NT All Pass means demoting by one point because of a

would be the final contract if faced with the and/or intermediates, or promoting by one

same dummy as in Deal 1. On a good day West led the four of hearts and it wasn’t point because of better shape (say a five-

declarer might make a lot of tricks but most long before North-South had to admit card suit, although two four-carders are

Souths would be happy enough to play in a defeat, losing four hearts and the two better than only one) intermediates and/

part-score. black aces. The plus scores for North- or aces.

THE World Bridge Federation governs the either a different scoring method or event.

rules of on-line bridge, played on your Opportunities are there to play match-

computer and connected to a ‘website pointed pairs, teams, IMPs and individuals.

bridge club’. Some small ‘tweaks’ have In addition to elective seating, there are

by technology, who may be thousands of points and where results affect the BCL

find between Bridge Club Live (BCL) and all year round.

your local club is that there are literally You don’t feel competitive? There is a

hundreds of boards available every day. Social Bridge Room (does exactly what it are the starting points of great friendships

and/or weekly, there is on going ‘drop in’ first arrive). into ‘real’ life.

bridge 24/7. Board results are instant – a double- A good on-line club offers all the variety

Simply join a table, play a few hands, edged sword sometimes! Good because of games and facilities, including coaching,

then get back to work (or bed), go out for scores are seen immediately and bad that you expect of a bridge club in your

lunch or even move into another area of because, just occasionally, when something local town – except that there is no waitress

the club. goes wrong, players will type/chat the first service and you have to provide your own

Whatever your choice, you may play thing that comes into their head without snacks. In some ways, there is more on offer

either with a pre-arranged or a pick-up- thinking and emotions may run high. on-line.

partner (pup). Usually, however, the chat bar is one of Connecting to www.bridgeclublive.com

The club is divided into rooms that offer the great plusses of BCL. The conversations opens a whole new world – literally!