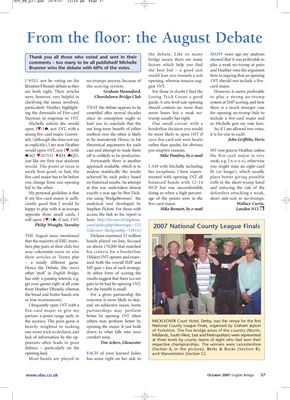 From the floor: the August Debate

the debate. Like so many MANY years ago my analyses

Thank you all those who voted and sent in their bridge issues, there are many showed that it was preferable to

comments – too many to be all published! Michelle factors which help you find play a weak no-trump at pairs

Brunner wins the debate with 60% of the votes. the best bid – a good suit and Heather wins the argument

I WILL not be voting on the no-trumps anyway, because of opening, whereas tenaces sug- 1NT should not include a five-

are both right. Their articles Graham Hannaford, For those in doubt I find the However, it seems preferable

were, however, very helpful in Churchdown Bridge Club Losing Trick Count a good to play a strong no-trump

Stayman in response to 1NT. since its conception ought to trump usually has eight. include a five-card major and

Michelle admits she would lead you to conclude that the One small caveat: with a so Michelle gets my vote here.

open 1♥/1♠, not 1NT, with a net long-term benefit of either borderline decision you would So, if I am allowed two votes,

strong five-card major. Conver- method over the other is likely be more likely to open 1NT if it is for one to each!

sely (although she does not say to be immaterial. Hence, to list your five-card suit were hearts John Griffiths, Herts

so explicitly), I am sure Heather theoretical arguments for each rather than spades, for obvious

would open 1NT, not 1♥, with case and attempt to trade them pre-emptive reasons. MY vote goes to Heather, unless

just like my first-year students Fortunately there is another weak, e.g. J-x-x-x-x), otherwise

would. The point at issue is approach available, which is to I AM with Michelle including you might miss an eight-card

surely how good, or bad, the analyse statistically the results her exceptions. I have experi- fit (or longer), which usually

you change from one opening on historical results. An attempt balanced hands with 12-14 ruffs in the short-trump hand

bid to the other. at this was undertaken almost HCP but was uncomfortable and reducing the risk of the

My personal guideline is that exactly a year ago by Ben Dick- doing so when a high percent- defenders attacking a weak,

if my five-card major is suffi- ens using ‘BridgeBrowser’, the age of the points were in the short side-suit in no-trumps.

ciently good that I would be analytical tool developed by five-card major. Wallace Curtis,

happy to play with it as trumps Stephen Pickett. For those with Mike Bennett, by e-mail London N12

opposite three small cards, I access, the link to his report is

that the majority of EBU mem- hands played on-line, focused

bers play pairs at their club, but on about 170,000 that matched

your columnists seem to aim his criteria for a borderline

their articles at Teams play 1Major/1NT opener, and exam-

– a totally different game. ined both the overall IMP and

Hence the Debate, like most MP gain v loss of each strategy.

other ‘stuff’ in English Bridge, At either form of scoring the

has only a passing interest, e.g. results suggest that there is a net

get your games right at all costs gain to be had by opening 1NT,

from Heather Dhondy, whereas but the benefit is small.

the bread and butter hands win For a given partnership the

or lose tournaments. outcome is more likely to dep-

I frequently open 1NT with a end on subjective issues. Some

five-card major to give my partnerships may perform

partner a point range early in better by opening 1NT when

the auction. The pairs game is others may perform better by MICKLEOVER Court Hotel, Derby, was the venue for the first

one more trick as declarer, and down to what falls into your of Yorkshire. The five bridge areas of the country (North,

lack of information by the op- comfort zone.

defence – particularly on the (Section A, in the picture), Berks & Bucks (Section B),

opening lead. EACH of your learned ladies and Warwickshire (Section C).