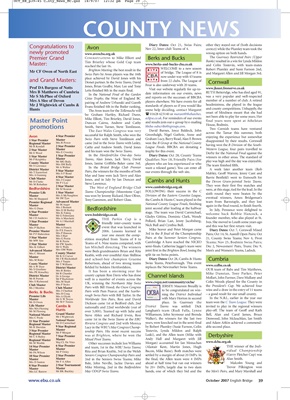 COUNTY NEWS Diary Dates: Oct 21, Swiss Pairs; other they stayed out of (both decisions

Congratulations to Avon Nov 22, Inter-club Teams of 4. correct) while the Plumley team took the

www.berks-and-bucks-cba.co.uk and Colin Tostevin, with team-mates

Brighton Meeting: the best result in the WELCOME to a new season Robert Plumley and Susie Farnon 2nd,

Mr CF Owen of North East of bridge. The League of 8 is and Margaret Allen and Jill Morgan 3rd.

Swiss Pairs by Avon players was the 16th

and Grand Masters: Dorset partner. In the Swiss Teams, David from 22 clubs. The League of

Mrs B Matthews of Cumbria date information on our events, news RUTH Betteridge, who has died aged 91,

In the National Final of the Garden

Mr S McPhee of Oxford Cities Trophy, the West of England BC and reports on the successes of BBCBA was a very popular and well-respected

Mrs A Slee of Devon pairing of Andrew Urbanski and Gareth players elsewhere. We have events for all member of a number of club. A retired

Mr J Wightwick of Cambs & standards of players so if you would like headmistress, she played in the league

The Avon team for the Tollemache will

eclipse.co.uk. For reminders of our events not been able to play for some years. Her

Master Point Duncan Cairns, Andrew and Cathy and results join our e-group by e-mailing final years were spent at Athelstan

The East Wales Congress was very

across the Tamar this summer, both

enjoying the experience but somewhat

disappointed by their results. Cornwall

Regional Master came 2nd in the Swiss Teams with Lesley, won the B Group at the National County

Mrs E Crossley and his team won the Swiss Teams. trophy for this event.

Mr E Wood Derby for the National Final against the

Master winners in other areas. The standard of

County Master Mr MG Baily play was high and the day was enjoyable.

Mr A Wallen In the Bristol Bridge Club Premier want a relaxed game). You can enter all

Ms T Easterford Pairs, the winners for the months of both our events through the web site.

4 Star Master May and June were Jack Terry and Alan

Jones, and in July by Ian Duncan and

Ms M Robathan They won their first five matches and

FOLLOWING their success in the C were, at this stage, tied for the lead. In the

sixth round they were beaten by the

Tony Gammon, and Robert Glass. the Cambs & Hunts C team played in the

Premier Regional Advanced Master team from Barnstaple, and they lost

again in the final round, to finish fourth.

Mrs D M Burley Bedfordshire joint second after leading at the halfway In July, Penzance were delighted to

THE Parkin Cup is a Pollard, Brian Last, Jenny Jacobsberg,

3 Star Premier Mr A J Marshall Ives. She moved to Louth some years ago

Nick Bull and Cynthia Bull. and this was her first return visit.

Mrs P Skelton Mrs A Francis event that was launched in

Mr MW Sim etition morphed from Teams of 8 to

were Beds grandmasters Brian and Rita

Mrs PE Kinselley It has been a storming year for

well in a number of events across the

UK, winning the Northants May Swiss www.cwgsy.net/community/cicba/ Colin Woods played for the County in

Mrs J Charlton Pairs with Pam Pearce; and the Scarbo- to be congratulated on win- wins and a draw in the entry of 11 teams

Master Mr G W Noyes Worldwide Sim Pairs, Ron and David with Mary Horton in second In the N.B.L. earlier in the year our

Mrs MA Fleming nationally and 22nd worldwide (out of

Mr M Fleming Hunts over 5,000). Teamed up with Julie and Langham’s team (Rudi Falla, Lynne play-off. The team of Geoff and Kath

Regional Master Mr D Carmichael Riviera Congress and 2nd with Monica years, were knocked out in the semi-final and Adam Aitkin achieved a commend-

Mr C S Bailey 7 Star Premier was at Brighton, where he won the Laski), and the Allen team (Mike with Derbyshire

Master and team, 1st in the WBU Swiss Teams;

10 Star Premier 2 Star Premier Seniors Congress Championship Pairs and settled by a margin of about 20 IMPs. In (Gerry Fletcher Cup) was

Bale, John Neville, Jackie Davies and ahead at half time but ran out winners Malcolm Young and

Mrs LC Barrow Mr BK Buckley May ODGP Swiss Teams. hands, one of which they bid and the the Men’s Pairs, and Mary Marshall and