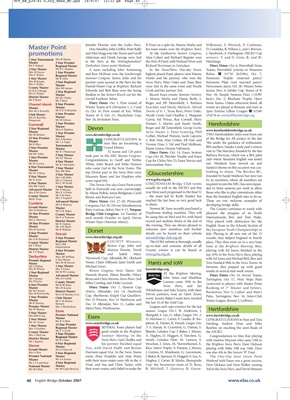 promotions and Alex Hogg won the Teams and Geoff

Alderman and Derek George were 2nd

At the Eastbourne Seniors Congress,

Master 3 Star Premier in the Pairs at the Nottinghamshire/ the Pairs B Final, with Michael Wren and Hutchings

Master Master Winter Teams of 8 (Divisions 1, 2, 3 and Fearnley and Sheila Melnick. Mixed events are played at Romsey and start at

Mr R Bliss Ann Slee on becoming a Yvonne Dias; 3. Val and Paul Mollison, ‘90s under the guidance of enthusiastic

Master Mr N J Waterman 52 teams and 126 pairs visit to The Marches, founded by the late

Master Congratulations to Geoff and Nethie Cup for Clubs; Nov 25, Essex Novice and club where Standard English was tested

6 Star Tournament 3 Star Master who came 2nd in the Swiss Teams. The Sandra’s theme on this occasion was cue-

top Devon pair in the Swiss Pairs were bidding to slams. The Birches BC,

Maureen Baser and Ian Hopkins who

Mrs P M Green Mrs E A Nunn by Alison Pollok, Amos Bridgman, Carol year three such progressed to the final 32 those who like to play conventions other

Mrs J Trapnell Ritzen and Barbara Carr. than the Standard English ones to do so.

Master Mr E A Treharne each month October to April, Devon be using this on Wed and Fri, with hand Internationals, Ben and Tom Paske.

Winter Pairs (Newton Abbot). They played with distinction for the

Master Mr A R Hards the evening. They are always pleased to English Team in the Schools Section of

Dorset details can be found on their website July. Playing in all save one of the 15

County Master Regional Master COUNTY Winners: The GCBA website is thorough, usually place. They then went on to a very busy

Gladwinfield Boston Cup: John and up-to-date and contains details of all time at the Brighton Meeting: Ben,

District Master 4 Star Premier Marion Howitt, David County events: it can be found at playing with Ed Jones, finished in the

Master and Isabel Marr. www.gcba.org.uk. top 20% in the Swiss Pairs; then, playing

Mr A Pilling Michael Gore). between, they popped up with good

Master Mrs H Kearns Ranking of 1* Master and below),

Mr R Clarke with Andrew Macnair who came 10th in

with their team-mates were 4th in the A Hughes, J. Carter, B. Marks. Basingstoke Weekend with Essex was a great success,