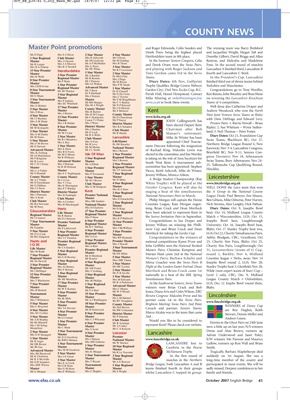 Derek Peers being the highest placed and Jacqueline Wright, Megan Taft and

Mrs L Peers and Derek Oram won the Swiss Pairs, Fyne. In the second round of matches

Teams. In the President’s Cup, Lancashire

October Congress. Kent will also be WELL DONE the Leics team that won

Master 1 Star Master nationally in a heat of the BBL Spring Level 2 only, CBC; Dec 9, Midland

1 Star Premier Would you like to be considered to

Mr C Mark Master were a little up on last year; N/S winners

Cumbria in the Pearse Smith.

Mr K Cholerton Mrs J E Green 1 Star Tournament 3 Star Regional In the first round of suddenly on 1st August. She was a

matches in the Northern long-time member of the county and

Mrs SDE Wilson Mr G R Horn Tournament 1 Star Regional Bridge League, both Lancashire A and B participated in most events. She will be