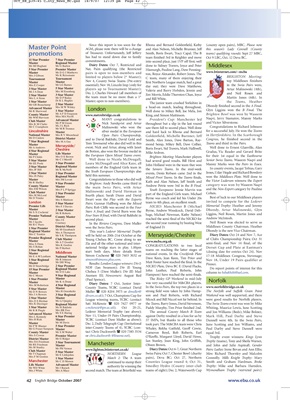 Since this report is too soon for the Rhona and Bernard Goldenfield, Kathy (county open pairs), MBC. Please note

has had to stand down due to family

limited to players below 2* Master); C team, many of them enjoying their BRIGHTON Meeting:

Mrs E Cooper Mr LG Barnes essential); Nov 18, Lincoln Imp (only for day out; they were Dave Matthews, in the Swiss Pairs were,

Mrs L A Stone Mr D P Bailey the team must be no more than a 1* and Bill White. Martin Jones (6th). In

Mrs M W Wildey a head-on match, leading throughout. Dhondy finished second in the A Final.

Mrs K M Clarke Mr P M Green Nick Sandqvist and Artur throughout but a slip in the last round and Victor Silverstone.

Lincolnshire Master silver medal in the European and hard luck to Rhona and Bernard for a successful July. He won the Teams

Master Tom Townsend who also did well in this mond Semp, Mikey Bell, Dave Collier, Teams and third in the Pairs.

members of the England Girls team in In county events, Jacqui Tobias, Gary

Master Mrs JM Lovatt Congratulations to those who did well the Victor Ludorum winners: the Expert

County Master Master Andrew Petrie were 3rd in the B Final. category was won by Waseem Naqvi

Mrs EM Wilson the main Swiss Pairs, with Artur and the Non-Expert category by Pauline

Malinowski and David Herman in Youth Europeans: Jennie Marvin was

Master Best of luck to our Middlesex players

London team to 4th place, an excellent result. invited to compete for the Lederer

Stars A final; and David Burn won the

Master Mrs J E second place. reached the semi-final of the NICKO for

Mr B C Peers In the Riviera Congress, Dave Muller

Mr S K Thompson will be held on 20th-21st October at the Merseyside/Cheshire Diary Dates: Oct 24 and Nov 7, Ace

Zia and all the other national and inter- semi-final, and Nov 14 final, of the

2 Star Regional start both days. More details from teams on reaching the latter stages of

Mrs J A Bowers 3 Star Regional dircon.co.uk); 7 Oct, Champions Cup for son and Paul Roberts, with Richard Weekend was well supported, and there

Mrs L Kennedy 6 Star Premier Nov 11, Under-19 Pairs Championship, against Derby resulted in a loss for us by Mark Hill, Paul Darby and Steve

Mrs H Rizk Master YCBC (contact Dave Muller as above); 37 IMPs, but thanks to all those who Dannell were 4th. In the Swiss Pairs,

took part. The M&CBA team were Chris June Scotting and Jon Williams, and