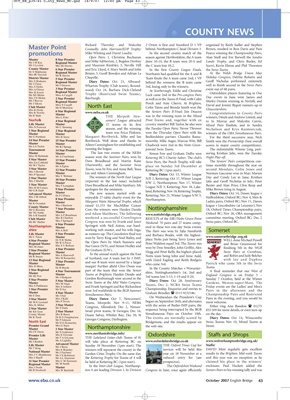 In the second county match of the

season against Hertfordshire, the A team

Mrs IR Veecock Brister. 5. Geoff Bowden and Adrian La Northants had qualified for the A and B At the Welsh Bridge Union May

Mrs S Doltis 3rd, losing only to the winners.

Mrs US Mehta 2 Star Premier Bawburgh. Day events in June were James and

as well as in the Teams B Final, with Colin

Master Master team was Erica Pinkney, won the Thursday Open Pairs with his winners of the OBA Simultaneous Pairs.

Chadwick were 2nd in the Notts Green- scores in major county competitions).

Mr M J Taylor Mr A Eglon (Hurworth), and the Summer Swiss place on Sunday 3rd December at tinue monthly throughout the year on

working web master, and his wife Inga, The Pairs was won by Julia Staniforth Somerset

Life Master as runners-up. The Consolation final was and Barbara Boaler, with the highest-

Regional Master Mr B A Pacey the Open Pairs by Mark Stanners and Peter Waldron equal 3rd. The Teams was

Mrs M Kennerley of Scotland, our A team lost by 1 IMP, w ith Joe and Daphne

Teams at Brighton; Hayden Dando and England Congress is on Friday 5 –

5 Star Premier Gordon Roxborough were second in the Sunday 7 October, held at the Winter

Mrs S Ashurst Friday events are the Ladies’ and Men’s

were 3rd worldwide in the BGB Summer Championship. Enquiries and entries to Pairs in the afternoon and the

Mrs J Kidd Diary Dates: Oct 7, Newcomers’ On Wednesdays the President’s Cup Pairs in the evening, and you would be

Mrs JL Miller 3 Star Master with the series of Butler-IMP pairs, the Either ring Ann Bawdon 01275

2 Star Master Israel pivot teams, St Georges; Dec 16, sequence being interrupted by the BGB 853 509 for more details, or even turn up

Mr T A Gwynne THE Lakeland (inter-club Teams of 8)

Mr I Rankin Ms A Lightley will take place at Kettering BC on www.oxfordshirebridge.co.uk www.wolverhamptonbridge.org.uk/

Mrs E Bramley winners will represent the county in the

Mrs J V Monkhouse Garden Cities Trophy. On the same day, year on 18 November at a results in the Brighton Mid-week Teams

11 Star Premier Mrs C M Simmons be held at Kettering BC (1pm start). prospectus). claimed his place in the winners’

Mr B Swalwell Mrs W Beeforth ton A are leading Division 1. In Division Congress in June, once again efficiently Seniors Pairs to his winning tally and was