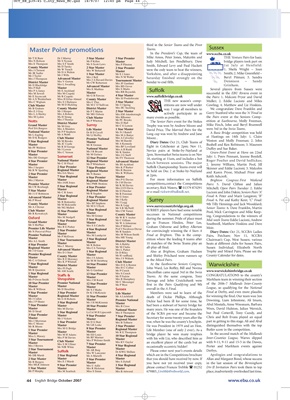 third in the Senior Teams and the Pivot

In the President’s Cup, the team of www.sccba.co.uk

way. I urge all members to

David Price. The Married Pairs for the

Novice pairs at Stoke-by-Nayland at

Green-Point Event at Hove on 22nd

18, starting at 11am, and includes a hot Roger Poulter and David Sedlickas;

during the summer. Pride of place must Mid-week Teams Eddie Lucioni, Andrew

Master 3 Star Regional etition where the leading 8 teams after

Master Master 10 matches of the Swiss Teams play an heats at different clubs for Sussex Pairs,

Turnage and John Cruickshank were Markham team in winning their section

Mrs R Willison Mr D Heseltine Sussex overall in the A Final. League, so qualifying for the National

9 Star Premier 3 Star Premier Dr K I McKenzie Life Master Members were sad to learn of the Final at Derby, and even more plaudits

Master Regional Master 11 Star Premier Mr A Litchfield death of Dickie Phillips. Although for winning the final. Our team was: Jon

Master Mrs M Davies Master National Master many years. He was one of the founders Wren, David Hulston, Julian Wernick,

Mrs I Merriman 1 Star Premier Mr D G Butt war, when he was the county’s lynchpin. part in getting to this stage. Ali and Abul

Master Mr LR Leake 3 Star Premier He was President in 1979 and an Hon. distinguished themselves with the top

Master Master Life Member (one of only 2 ever). As a

2 Star Master Master 5 Star Premier Master that you should have received by now. If Allan and Margaret Bond, whose success

you have not yet received your copy, in the last session of the Birmingham