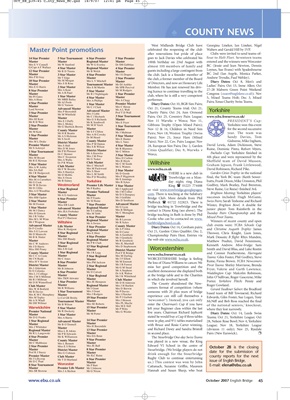 Master Point promotions celebrated the reopening of the club

after renovations but pride of place

Walters and Gerald Hill by 1VP.

Clubs were invited to send teams-of-

almost 100 members of family and

the club, a former member of the Board

Mr A B Patel ing licence to continue travelling to the

Mrs A Hone Mrs A Phillips Mrs A Clegg performer.

Mr R J Millman Club Master in which she involved herself. Porter. Yorkshire Flitch: Penny and

Mr A N Whall Tournament Master Master Mrs J Henson ‘newcomer’). Instead, you can only McNiff and Bob Ross reached the final

Mr C Malthouse Master was played in a new venue, the King

October 28 is the closing

District Master Stourbridge. (We bridge players do not

drink enough for the Stourbridge

Mr D C Pratt Master us.) This contest was won by John issue of English Bridge.