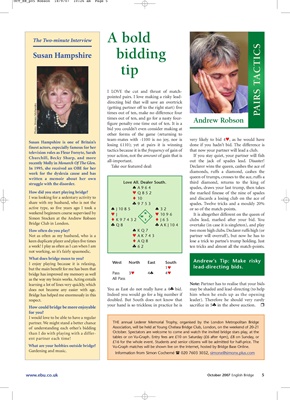 The Two-minute Interview A bold

I LOVE the cut and thrust of match-

directing bid that will save an overtrick

(getting partner off to the right start) five

times out of ten, make no difference four

times out of ten, and go for a nasty four-

figure penalty one time out of ten. It is a

bid you couldn’t even consider making at

other forms of the game (returning to

Susan Hampshire is one of Britain’s

losing £110); yet at pairs it is winning done if you hadn’t bid. The difference is

finest actors, especially famous for her

tactics because it is the frequency of gain of that now your partner will lead a club.

your action, not the amount of gain that is If you stay quiet, your partner will fish

recently Molly in Monarch Of The Glen. all-important. out the jack of spades lead. Disaster!

In 1995, she received an OBE for her Take our featured deal: Declarer wins the queen, cashes the ace of

work for the dyslexia cause and has diamonds, ruffs a diamond, cashes the

written a memoir about her own queen of trumps, crosses to the ace, ruffs a

struggle with the disorder. Love All. Dealer South. third diamond, returns to the king of

♠A964 spades, draws your last trump, then takes

How did you start playing bridge? ♥Q852 the marked finesse of the nine of spades

Simon Stocken at the Andrew Robson ♦K97432 S ♦J65 clubs lead, marked after your bid. You

Not as often as my husband, who is a ♥AK743 partner will overruff), but now he has to

a week! I play as often as I can when I am ♣62 ten tricks and almost all the match-points.

not working, so it’s fairly spasmodic.

What does bridge mean to you?

but the main benefit for me has been that 1♥ lead-directing bids.

as the way my brain works. Acting entails All Pass

learning a lot of lines very quickly, which Note: Partner has to realise that your bids

does not become any easier with age. You as East do not really have a 4♣ bid. may be shaded and lead-directing (to help

respect. doubled. But South does not know that leader). Therefore he should very rarely

How could bridge be more enjoyable your hand is so trickless; in practice he is sacrifice in 5♣ in the above auction.

I would love to be able to have a regular

partner. We might stand a better chance THE annual Lederer Memorial Trophy, organised by the London Metropolitan Bridge

of understanding each other’s bidding Association, will be held at Young Chelsea Bridge Club, London, on the weekend of 20-21

than I do with playing with a differ- October. Spectators are welcome to come and watch the invited bridge stars play, at the

£16 for the whole event. Students and senior citizens will be admitted for half-price. The

What are your hobbies outside bridge? Vu-Graph matches will be shown live on the Internet, hosted by Bridge Base Online.