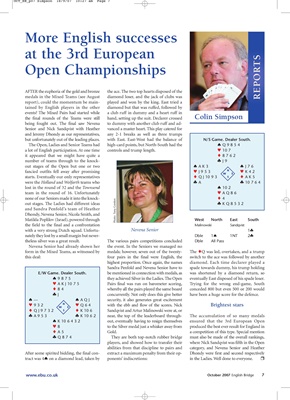 at the 3rd European

AFTER the euphoria of the gold and bronze the ace. The two top hearts disposed of the

medals in the Mixed Teams (see August diamond loser, and the jack of clubs was

report), could the momentum be main- played and won by the king. East tried a

tained by English players in the other diamond but that was ruffed, followed by

events? The Mixed Pairs had started while a club ruff in dummy and a heart ruff in

the final rounds of the Teams were still hand, setting up the suit. Declarer crossed Colin Simpson

being fought out. The final saw Nevena to dummy with another club ruff and ad-

Senior and Nick Sandqvist with Heather vanced a master heart. This play catered for

and Jeremy Dhondy as our representatives, any 2-1 breaks as well as three trumps

but unfortunately out of the leading places. with East. East-West had the balance of N/S Game. Dealer South.

The Open, Ladies and Senior Teams had high-card points, but North-South had the ♠Q9854

a lot of English participation. At one time controls and trump length. ♥ 10 7

number of teams through to the knock- ♣J9

team in the round of 16. Unfortunately ♥AQ86

none of our Seniors made it into the knock- ♦4

out stages. The Ladies had different ideas ♣KQ8532

and Sandra Penfold’s team of Heather

the field to the final and a confrontation Malinowski Sandqvist

Nevena Senior had already shown her the event. In the Seniors we managed no

form in the Mixed Teams, as witnessed by medals; however, seven out of the twenty- The ♦Q was led, overtaken, and a trump

this deal: four pairs in the final were English, the switch to the ace was followed by another

highest proportion. Once again, the names diamond. Each time declarer played a

Sandra Penfold and Nevena Senior have to spade towards dummy, his trump holding

E/W Game. Dealer South. be mentioned in connection with medals, as was shortened by a diamond return, so

♠9875 they achieved Silver in the Ladies. The Open eventually East disposed of his spade loser.

♥ A K J 10 7 5 Pairs final was run on barometer scoring, Trying for the wrong end-game, South

♣J concurrently. Not only does this give better have been a huge score for the defence.

♥Q64 with the ebb and flow of the scores. Nick Brightest stars

♠ K 10 6 4 3 2 out, eventually having to resign themselves ensured that the 3rd European Open

♦A5 Gold. a competition of this type. Special mention

♣Q874 They are both top-notch rubber bridge must also be made of the overall rankings,

players, and showed how to transfer their where Nick Sandqvist was fifth in the Open

abilities from that discipline to pairs and category, and Nevena Senior and Heather

After some spirited bidding, the final con- extract a maximum penalty from their op- Dhondy were first and second respectively

tract was 4♠ on a diamond lead, taken by ponents’ indiscretions: in the Ladies. Well done to everyone.