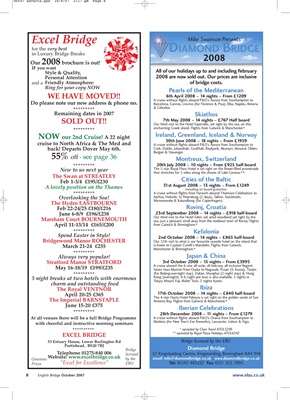 Style & Quality, All of our holidays up to and including February

Personal Attention 2008 are now sold out. Our prices are inclusive

and a Friendly Atmosphere: of bridge costs.

Ring for your copy NOW

Pearls of the Mediterranean

Our third visit to the Hotel Esperides, set right by the sea, on this

that stretches for 5 miles along the shores of Lake Geneva.**

The Swan at STREATLEY

including on board gratuities.

********* A cruise without flights from Harwich aboard Thomson Celebration to

Our third visit to the Hotel Eden, set amid woodland yet right by the

Marsham Court BOURNEMOUTH sea, just a pleasant stroll away from the medieval town of Rovinj. Flights

March 21-24 £235 is home to Captain Corelli's Mandolin. Flights from Gatwick,

with cheerful and instructive morning seminars