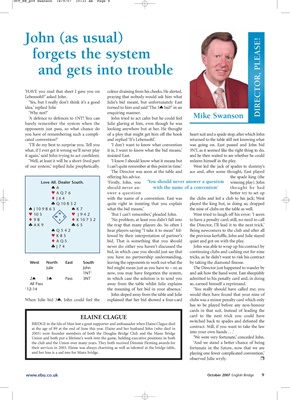 and gets into trouble

‘HAVE you read that sheet I gave you on colour draining from his cheeks. He alerted,

Lebensohl?’ asked John. praying that nobody would ask him what

‘Why not?’ enquiring manner.

‘A defence to defences to 1NT! You can John tried to act calm but he could feel Mike Swanson

barely remember the system when the Julie glaring at him, even though he was

opponents just pass, so what chance do looking anywhere but at her. He thought

you have of remembering such a compli- of a ploy that might get him off the hook heart suit and a spade stop, after which John

cated convention?’ and replied ‘It’s Lebensohl’. returned to the table still not knowing what

‘I’ll do my best to surprise you. Tell you ‘I don’t want to know what convention was going on. East passed and John bid

what, if I ever get it wrong we’ll never play it is, I want to know what the bid means,’ 3NT, as it seemed like the right thing to do,

it again,’ said John trying to act confident. insisted East. and he then waited to see whether he could

‘Well, at least it will be a short-lived part ‘I know I should know what it means but redeem himself in the play.

of our system,’ replied Julie prophetically. I can’t quite remember at this point in time.’ West led the jack of spades to dummy’s

The Director was soon at the table and ace and, after some thought, East played

offering his advice. the spade king (the

Love All. Dealer South. ‘Firstly, John, you ‘You should never answer a question winning play). John

♥AQ76 swer a question better try to set up

♦J64 with the name of a convention. East was the clubs and led a club to his jack; West

♣ Q 10 8 3 2 quite right in insisting that you explain played the king but, in doing so, dropped

♣AK9 ♣65 the trap that many players do. So often I the Director, I’ll lead it to the next trick.’

♥K85 lowed by their interpretation of partner’s the previous kerfuffle, John and Julie stayed

♦AQ5 bid. That is something that you should quiet and got on with the play.

♣J74 never do: either you haven’t discussed the John was able to wrap up his contract by

bid, in which case you should just say that continuing clubs and cashing out for nine

you have no partnership understanding, tricks, as he didn’t want to risk his contract

West North East South leaving the opponents to work out what the by taking the diamond finesse.

Julie John bid might mean just as you have to – or, as The Director just happened to wander by

1NT1 now, you may have forgotten the system, and ask how the hand went. East sheepishly

2♠ 3♠ Pass 3NT in which case the solution is to send you admitted to his penalty card and, in doing

All Pass away from the table whilst Julie explains so, earned himself a reprimand.

12-14 the meaning of her bid in your absence.’ ‘You really should have called me; you

When Julie bid 3♠, John could feel the explained that her bid showed a four-card clubs was a minor penalty card which only

has to be played before any non-honour

cards in that suit. Instead of leading the

ELAINE CLAGUE card to the next trick you could have

switched back to spades and defeated the

at the age of 89 at the end of June this year. Elaine and her husband John (who died in contract. Still, if you want to take the law

2005) were founder members of both the Douglas Bridge Club and the Manx Bridge into your own hands . . .’

Union and both put a lifetime’s work into the game, holding executive positions in both ‘We were very fortunate,’ conceded John.

the club and the Union over many years. They both received Dimmie Fleming awards for ‘And we stand a better chance of being

their services in 2003. Elaine was always charming as well as talented at the bridge table, fortunate in the future, now that we are

and her loss is a sad one for Manx bridge. playing one fewer complicated convention,’