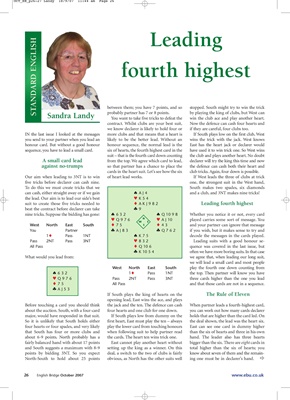 between them; you have 7 points, and so stopped. South might try to win the trick

probably partner has 7 or 8 points. by playing the king of clubs, but West can

Sandra Landy You want to take five tricks to defeat the win the club ace and play another heart.

contract. Whilst clubs are your best suit, Now the defence can cash four hearts and

we know declarer is likely to hold four or if they are careful, four clubs too.

IN the last issue I looked at the messages more clubs and that means that a heart is If South plays low on the first club, West

you send to your partner when you lead an likely to be the better lead. Without an wins the trick with the jack. West knows

honour card. But without a good honour honour sequence, the normal lead is the East has the heart jack or declarer would

sequence, you have to lead a small card. six of hearts, the fourth highest card in the have used it to win trick one. So West wins

suit – that is the fourth card down counting the club and plays another heart. No doubt

A small card lead from the top. We agree which card to lead, declarer will try the king this time and now

cards in the heart suit. Let’s see how the six club tricks. Again, four down is possible.

Our aim when leading to 3NT is to win of heart lead works. If West leads the three of clubs at trick

five tricks before declarer can cash nine. one, the strongest suit in the West hand,

To do this we must create tricks that we South makes two spades, six diamonds

can cash, either straight away or if we gain ♠ AJ4 and a club, and 3NT makes nine tricks!

beat the contract before declarer can take ♣ 9

♥ A J 10 played carries some sort of message. You

What would you lead from: we agree that, when leading our long suit,

we will lead a small card and most people

West North East South play the fourth one down counting from

♦ 75 All Pass and that those cards are not in a sequence.

Before touching a card you should think the jack and the ten. The defence can cash When partner leads a fourth-highest card,

about the auction. South, with a four-card four hearts and one club for one down. you can work out how many cards declarer

major, would have responded in that suit. If South plays low from dummy on the holds that are higher than the card led. On

So it is unlikely that South holds either first heart, East must play the ten – always the deal shown, the lead was the heart six.

four hearts or four spades, and very likely play the lower card from touching honours East can see one card in dummy higher

about 6-9 points. North probably has a the cards. The heart ten wins trick one. hand. The leader also has three hearts

fairly balanced hand with about 17 points East cannot play another heart without bigger than the six. There are eight cards in

and South suggests a maximum with 8-9 setting up the king as a winner. On this total higher than the six of hearts; you

points by bidding 3NT. So you expect deal, a switch to the two of clubs is fairly know about seven of them and the remain-

North-South to hold about 25 points obvious, as North has the other suits well ing one must be in declarer’s hand.