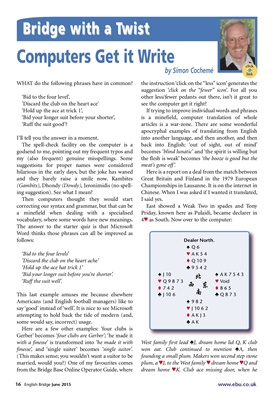 WHAT do the following phrases have in common?

'Bid to the four level',

'Discard the club on the heart ace'

'Bid your longer suit before your shorter',

I'll tell you the answer in a moment.

The spell-check facility on the computer is a

godsend to me, pointing out my frequent typos and

my (also frequent) genuine misspellings. Some

suggestions for proper names were considered

hilarious in the early days, but the joke has waned

and they barely raise a smile now. Kambites

suggestion). See what I mean?

Then computers thought they would start

correcting our syntax and grammar, but that can be

a minefield when dealing with a specialised

vocabulary, where some words have new meanings.

The answer to the starter quiz is that Microsoft

Word thinks those phrases can all be improved as

'Bid to the four levels'

'Discard the club on the heart ache'

'Bid your longer suit before you're shorter'.

This last example amuses me because elsewhere

say 'good' instead of 'well'. It is nice to see Microsoft

attempting to hold back the tide of modern (and,

some would say, incorrect) usage.

Here are a few other examples: 'four clubs is

Gerber' becomes 'four clubs are Gerber'; 'he made it

with a finesse' is transformed into 'he made it with

(This makes sense; you wouldn't want a suitor to be

married, would you?) One of my favourites comes

from the Bridge Base Online Operator Guide, where

the instruction 'click on the "less" icon' generates the

suggestion 'click on the "fewer" icon'. For all you

other less/fewer pedants out there, isn't it great to

see the computer get it right?

If trying to improve individual words and phrases

is a minefield, computer translation of whole

articles is a war-zone. There are some wonderful

apocryphal examples of translating from English

into another language, and then another, and then

back into English: 'out of sight, out of mind'

becomes 'blind lunatic' and 'the spirit is willing but

the flesh is weak' becomes 'the booze is good but the

Here is a report on a deal from the match between

Great Britain and Finland in the 1979 European

Championships in Lausanne. It is on the internet in

Chinese. When I was asked if I wanted it translated,

East showed a Weak Two in spades and Tony

4™ as South. Now over to the computer:

won eat. Club continued to mention ´A, then