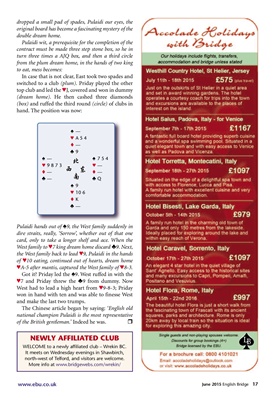 dropped a small pad of spades, Pulaidi our eyes, the

original board has become a fascinating mystery of the

Pulaidi wit, a prerequisite for the completion of the

contract must be made three step stone box, so he in

turn three times a AJQ box, and then a third circle

from the plum dream home, in the hands of two king

In case that is not clear, East took two spades and

switched to a club (plum). Priday played the other

top club and led the ™J, covered and won in dummy

(box) and ruffed the third round (circle) of clubs in

hand. The position was now:

Pulaidi hands out of ´9, the West family suddenly in

dire straits, really, 'Sorrow', whether out of that one

card, only to take a longer shelf and ace. When the

the West family back to lead ™9, Pulaidi in the hands

of ™10 eating, continued out of hearts, dream home

Got it? Priday led the ´9. West ruffed in with the

won in hand with ten and was able to finesse West

and make the last two trumps.

national champion Pulaidi is the most representa tive

of the British gentleman.' Indeed he was. r

WELCOME to a newly afiliated club - Wrekin BC.

It meets on Wednesday evenings in Shawbirch,

north-west of Telford, and visitors are welcome.