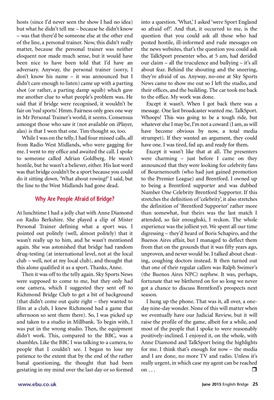 hosts (since I'd never seen the show I had no idea)

but what he didn't tell me - because he didn't know

- was that there'd be someone else at the other end

of the line, a personal trainer. Now, this didn't really

matter, because the personal trainer was neither

eloquent nor made much sense, but it would have

been nice to have been told that I'd have an

don't know his name - it was announced but I

didn't care enough to listen) came up with a parting

shot (or rather, a parting damp squib) which gave

me another clue to what people's problem was. He

said that if bridge were recognised, it wouldn't be

fair on 'real sports'. Hmm. Fairness only goes one way

amongst those who saw it (not available on iPlayer,

alas) is that I won that one. Tim thought so, too.

While I was on the telly, I had four missed calls, all

from Radio West Midlands, who were gagging for

me. I went to my office and awaited the call. I spoke

to someone called Adrian Goldberg. He wasn't

hostile, but he wasn't a believer, either. His last word

was that bridge couldn't be a sport because you could

do it sitting down. 'What about rowing?' I said, but

the line to the West Midlands had gone dead.

Why Are People Afraid of Bridge?

At lunchtime I had a jolly chat with Anne Diamond

on Radio Berkshire. She played a clip of Mister

Personal Trainer defining what a sport was. I

pointed out politely (well, almost politely) that it

wasn't really up to him, and he wasn't mentioned

again. She was astonished that bridge had random

drug-testing (at international level, not at the local

club - well, not at my local club), and thought that

this alone qualified it as a sport. Thanks, Anne.

Then it was off to the telly again. Sky Sports News

were supposed to come to me, but they only had

one camera, which I suggested they sent off to

Richmond Bridge Club to get a bit of background

(that didn't come out quite right - they wanted to

film at a club, I knew Richmond had a game that

afternoon so sent them there). So, I was picked up

and taken to a studio in Millbank. To begin with, I

was put in the wrong studio. Then, the equipment

didn't work. This, compared to the BBC, was a

shambles. Like the BBC I was talking to a camera, to

people that I couldn't see. I began to lose my

patience to the extent that by the end of the rather

banal questioning, the thought that had been

gestating in my mind over the last day or so formed

into a question. 'What,' I asked 'were Sport England

so afraid of?'. And that, it occurred to me, is the

question that you could ask all those who had

the news websites, that's the question you could ask

the TalkSport presenter who, at 5 am, had derided

our claim - all the truculence and bullying - it's all

about fear. Behind the shouting and the sneering,

they're afraid of us. Anyway, no-one at Sky Sports

News came to show me out so I left the studio, and

their offices, and the building. The car took me back

to the office. My work was done.

Except it wasn't. When I got back there was a

Whoops! This was going to be a tough ride, but

whatever else I may be, I'm not a coward (I am, as will

have become obvious by now, a total media

strumpet). If they wanted an argument, they could

have one. I was tired, fed up, and ready for them.

Except it wasn't like that at all. The presenters

were charming - just before I came on they

announced that they were looking for celebrity fans

of Bournemouth (who had just gained promotion

to the Premier League) and Brentford. I owned up

to being a Brentford supporter and was dubbed

Number One Celebrity Brentford Supporter. If this

stretches the definition of 'celebrity', it also stretches

the definition of 'Brentford Supporter' rather more

than somewhat, but theirs was the last match I

attended, so fair enoughski, I reckon. The whole

experience was the jolliest yet. We spent all our time

digressing - they'd heard of Boris Schapiro, and the

Buenos Aires affair, but I managed to deflect them

from that on the grounds that it was fifty years ago,

unproven, and never would be. I talked about cheat ing,

coughing doctors instead. It then turned out

that one of their regular callers was Ralph Swimer's

(the Buenos Aires NPC) nephew. It was, perhaps,

fortunate that we blethered on for so long we never

got a chance to discuss Brentford's prospects next

I hung up the phone. That was it, all over, a oneday

nine-day wonder. None of this will matter when

we eventually have our Judicial Review, but it will

raise the profile of the game, albeit for a while, and

most of the people that I spoke to were reasonably

positively-inclined. I enjoyed it, on the whole, with

Anne Diamond and TalkSport being the highlights

for me. I think that's enough for now - the media

and I are done, no more TV and radio. Unless it's

really urgent, in which case my agent can be reached