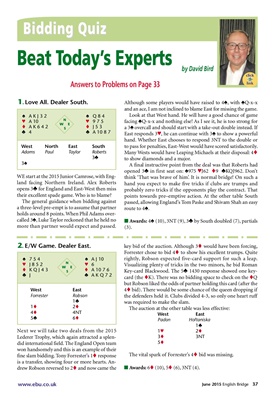 1.love All. Dealer South . Although some players would have raised to 4´, with ´Q-x-x

and an ace, I am not inclined to blame East for missing the game.

Look at that West hand. He will have a good chance of game

facing ´Q-x-x and nothing else! As I see it, he is too strong for

a 3´ overcall and should start with a take-out double instead. If

East responds 3™, he can continue with 3´ to show a powerful

hand. Whether East chooses to respond 3NT to the double or

to pass for penalties, East-West would have scored satisfactorily.

Many Wests would have Leaping Michaels at their disposal: 4t

to show diamonds and a major.

A final instructive point from the deal was that Roberts had

think 'That was brave of him'. It is normal bridge! On such a

probably zero tricks if the opponents play the contract. That

points towards pre-emptive action. At the other table South

key bid of the auction. Although 3t would have been forcing,

Forrester chose to bid 4t to show his excellent trumps. Quite

rightly, Robson expected five-card support for such a leap.

Visualizing plenty of tricks in the two minors, he bid Roman

(the tK). There was no bidding space to check on the tQ

4t bid). There would be some chance of the queen dropping if

the defenders held it. Clubs divided 4-3, so only one heart ruff

was required to make the slam.

The auction at the other table was less effective:

The vital spark of Forrester's 4t bid was missing.

Answers to Problems on Page 33

WE start at the 2015 Junior Camrose, with England

opens 3® for England and East-West then miss

their excellent spade game. Who is to blame?

The general guidance when bidding against

a three-level pre-empt is to assume that partner

3´, Luke Taylor reckoned that he held no

more than partner would expect and passed.

Next we will take two deals from the 2015

won handsomely and this is an example of their

is a transfer, showing four or more hearts. Andrew

Robson reversed to 2t and now came the