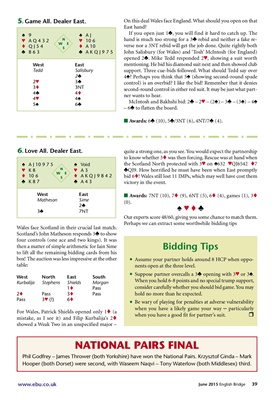 On this deal Wales face England. What should you open on that

If you open just 1®, you will find it hard to catch up. The

nor a 3NT rebid will get the job done. Quite rightly both

John Salisbury (for Wales) and 'Tosh' McIntosh (for England)

mentioning. He bid his diamond suit next and then showed club

support. Three cue-bids followed. What should Tedd say over

control) is an overbid? I like the bid! Remember that it denies

second-round control in either red suit. It may be just what partner

four controls (one ace and two kings). It was

then a matter of simple arithmetic for Iain Sime

to lift all the remaining bidding cards from his

box! The auction was less impressive at the other

For Wales, Patrick Shields opened only 1t (a

mistake, as I see it) and Filip Kurbalija's 2t

showed a Weak Two in an unspecified major -

quite a strong one, as you see. You would expect the partnership

to know whether 3t was then forcing. Rescue was at hand when

®QJ9. How horrified he must have been when East promptly

bid 6t! Wales still lost 11 IMPs, which may well have cost them

victory in the event.

Our experts score 48/60, giving you some chance to match them.

Perhaps we can extract some worthwhile bidding tips

• Assume your partner holds around 8 HCP when opponents

open at the three level.

When you hold 6-8 points and no special trump support,

consider carefully whether you should bid game. You may

hold no more than he expected.

• Be wary of playing for penalties at adverse vulnerability

when you have a likely game your way ─ particularly

when you have a good fit for partner's suit. r

Hooper (both Dorset) were second, with Waseem Naqvi - Tony Waterlow (both Middlesex) third.