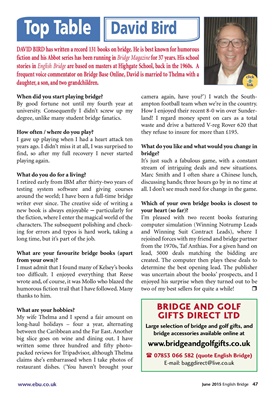 By good fortune not until my fourth year at

university. Consequently I didn't screw up my

degree, unlike many student bridge fanatics.

I gave up playing when I had a heart attack ten

years ago. I didn't miss it at all, I was surprised to

find, so after my full recovery I never started

I retired early from IBM after thirty-two years of

around the world; I have been a full-time bridge

writer ever since. The creative side of writing a

the fiction, where I enter the magical world of the

for errors and typos is hard work, taking a

long time, but it's part of the job.

What are your favourite bridge books (apart

I must admit that I found many of Kelsey's books

too difficult. I enjoyed everything that Reese

wrote and, of course, it was Mollo who blazed the

humorous fiction trail that I have followed. Many

My wife Thelma and I spend a fair amount on

between the Caribbean and the Far East. Another

big slice goes on wine and dining out. I have

reviews for Tripadvisor, although Thelma

claims she's embarrassed when I take photos of

restaurant dishes. ('You haven't brought your

camera again, have you?') I watch the South ampton

football team when we're in the country.

How I enjoyed their recent 8-0 win over Sunder land!

I regard money spent on cars as a total

waste and drive a battered V-reg Rover 620 that

they refuse to insure for more than £195.

It's just such a fabulous game, with a constant

Marc Smith and I often share a Chinese lunch,

discussing hands; three hours go by in no time at

all. I don't see much need for change in the game.

Which of your own bridge books is closest to

your heart (so far)?

and Winning Suit Contract Leads), where I

rejoined forces with my friend and bridge partner

lead, 5000 deals matching the bidding are

created. The computer then plays these deals to

was uncertain about the books' prospects, and I

enjoyed his surprise when they turned out to be

two of my best sellers for quite a while! r

DAVID BIRD has written a record 131 books on bridge. He is best known for humorous

fiction and his Abbot series has been running in Bridge Magazine for 37 years. His school

stories in English Bridge are based on masters at Highgate School, back in the 1960s. A

frequent voice commentator on Bridge Base Online, David is married to Thelma with a

Large selection of bridge and golf gifts, and