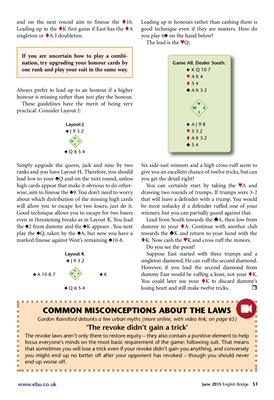 and on the next round aim to finesse the t10.

If you are uncertain how to play a com bi nation,

try upgrading your honour cards by

one rank and play your suit in the same way.

Always prefer to lead up to an honour if a higher

honour is missing rather than just play the honour.

These guidelines have the merit of being very

Simply upgrade the queen, jack and nine by two

ranks and you have Layout H. Therefore, you should

lead low to your ´Q and on the next round, unless

high cards appear that make it obvious to do other wise,

aim to finesse the ´9. You don't need to worry

about which distribution of the missing high cards

will allow you to escape for two losers, just do it.

Good technique allows you to escape for two losers

even in threatening breaks as in Layout K. You lead

the ´2 from dummy and the ´K appears . You next

Leading up to honours rather than cashing them is

good technique even if they are masters. How do

you play 6´ on the hand below?

give you an excellent chance of twelve tricks, but can

you get the detail right?

You can certainly start by taking the ™A and

drawing two rounds of trumps. If trumps were 3-2

that will leave a defender with a trump. You would

be most unlucky if a defender ruffed one of your

winners, but you can partially guard against that.

Lead from South towards the ®A, then low from

dummy to your tA. Continue with another club

towards the ®K and return to your hand with the

tK. Now cash the ™K and cross ruff the minors.

Do you see the point?

Suppose East started with three trumps and a

singleton diamond. He can ruff the second dia mond.

However, if you lead the second diamond from

dummy East would be ruffing a loser, not your tK.

You could later use your tK to discard dummy's

COMMON MISCONCEPTIONS ABOUT THE LAWS

'The revoke didn't gain a trick'

focus everyone's minds on the most basic requirement of the game: following suit. That means

that sometimes you will lose a trick even if your revoke didn't gain you anything, and conversely

end up worse off.