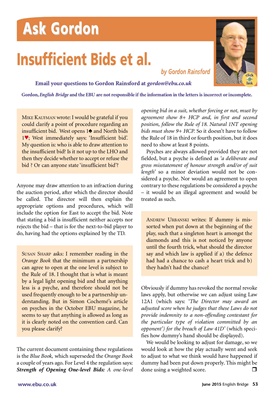 MIKE KAUFMAN wrote: I would be grateful if you

could clarify a point of procedure regarding an

My question is: who is able to draw attention to

the insufficient bid? Is it not up to the LHO and

then they decide whether to accept or refuse the

bid ? Or can anyone state 'insufficient bid'?

Anyone may draw attention to an infraction during

the auction period, after which the director should

be called. The director will then explain the

appropriate options and procedures, which will

include the option for East to accept the bid. Note

that stating a bid is insufficient neither accepts nor

do, having had the options explained by the TD.

SUSAN SHARP asks: I remember reading in the

Orange Book that the minimum a partnership

can agree to open at the one level is subject to

the Rule of 18. I thought that is what is meant

by a legal light opening bid and that anything

less is a psyche, and therefore should not be

used frequently enough to be a partnership un der

standing. But in Simon Cochemé's article

on psyches in the October EBU magazine, he

seems to say that anything is allowed as long as

it is clearly noted on the convention card. Can

The current document containing these regulations

is the Blue Book, which superseded the Orange Book

a couple of years ago. For Level 4 the regulation says:

opening bid in a suit, whether forcing or not, must by

agreement show 8+ HCP and, in first and second

bids must show 9+ HCP. So it doesn't have to follow

the Rule of 18 in third or fourth position, but it does

need to show at least 8 points.

Psyches are always allowed provided they are not

fielded, but a psyche is defined as 'a deliberate and

gross misstatement of honour strength and/or of suit

length' so a minor deviation would not be con sidered

a psyche. Nor would an agreement to open

contrary to these regulations be considered a psyche

- it would be an illegal agreement and would be

when put down at the beginning of the

play, such that a singleton heart is amongst the

diamonds and this is not noticed by anyone

until the fourth trick, what should the director

say and which law is applied if a) the defence

had had a chance to cash a heart trick and b)

they hadn't had the chance?

Obviously if dummy has revoked the normal revoke

laws apply, but otherwise we can adjust using Law

12A1 (which says: 'The Director may award an

adjusted score when he judges that these Laws do not

provide indemnity to a non-offending contestant for

the particular type of violation committed by an

opponent') for the breach of Law 41D' (which speci fies

how dummy's hand should be displayed).

We would be looking to adjust for damage, so we

would look at how the play actually went and seek

to adjust to what we think would have happened if

dummy had been put down properly. This might be

Gordon, English Bridge and the EBU are not responsible if the information in the letters is incorrect or incomplete.