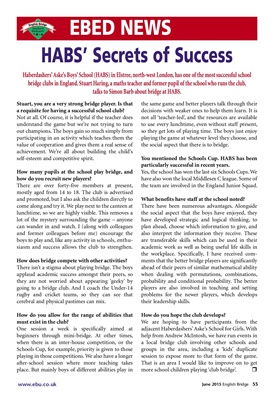 Stuart, you are a very strong bridge player. Is that

a requisite for having a successful school club?

Not at all. Of course, it is helpful if the teacher does

understand the game but we're not trying to turn

out champions. The boys gain so much simply from

participating in an activity which teaches them the

value of cooperation and gives them a real sense of

achievement. We're all about building the child's

How many pupils at the school play bridge, and

how do you recruit new players?

There are over forty-five members at present,

mostly aged from 14 to 18. The club is advertised

and promoted, but I also ask the children directly to

come along and try it. We play next to the canteen at

lunchtime, so we are highly visible. This removes a

lot of the mystery surrounding the game - anyone

can wander in and watch. I (along with colleagues

and former colleagues before me) encourage the

boys to play and, like any activity in schools, enthu siasm

and success allows the club to strengthen.

How does bridge compete with other activities?

There isn't a stigma about playing bridge. The boys

applaud academic success amongst their peers, so

they are not worried about appearing 'geeky' by

going to a bridge club. And I coach the Under-14

rugby and cricket teams, so they can see that

cerebral and physical pastimes can mix.

How do you allow for the range of abilities that

must exist in the club?

One session a week is specifically aimed at

beginners through mini-bridge. At other times,

when there is an inter-house competition, or the

Schools Cup, for example, priority is given to those

playing in those competitions. We also have a longer

place. But mainly boys of different abilities play in

the same game and better players talk through their

decisions with weaker ones to help them learn. It is

not all 'teacher-led', and the resources are available

to use every lunchtime, even without staff present,

so they get lots of playing time. The boys just enjoy

playing the game at whatever level they choose, and

the social aspect that there is to bridge.

You mentioned the Schools Cup. HABS has been

Yes, the school has won the last six Schools Cups. We

have also won the local Middlesex C league. Some of

the team are involved in the England Junior Squad.

What benefits have staff at the school noted?

There have been numerous advantages. Alongside

the social aspect that the boys have enjoyed, they

have developed strategic and logical thinking, to

plan ahead, choose which information to give, and

also interpret the information they receive. These

are transferable skills which can be used in their

academic work as well as being useful life skills in

the workplace. Specifically, I have received com ments

that the better bridge players are significantly

ahead of their peers of similar mathematical ability

when dealing with permu tations, combinations,

probability and conditional probability. The better

players are also involved in teaching and setting

problems for the newer players, which develops

How do you hope the club develops?

We are hoping to have participants from the

help from Andrew McIntosh, we have run events in

a local bridge club involving other schools and

groups in the area, including a 'kids' duplicate

session to expose more to that form of the game.

Haberdashers' Aske's Boys' School (HABS) in Elstree, north-west London, has one of the most successful school

bridge clubs in England. Stuart Haring, a maths teacher and former pupil of the school who runs the club,

talks to Simon Barb about bridge at HABS.