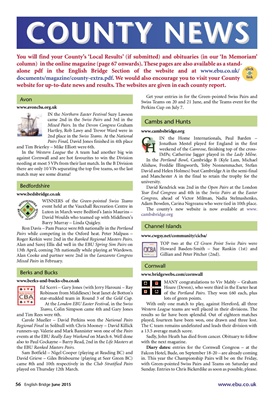 came 2nd in the Swiss Pairs and 3rd in the

Hartley, Rob Lawy and Trevor Ward were in

2nd place in the Swiss Teams. At the National

In the Western League the A team had another big win

against Cornwall and are hot favourites to win the Division

needing at most 5 VPs from their last match. In the B Division

there are only 10 VPs separating the top five teams, so the last

match may see some drama!

WINNERS of the Green-pointed Swiss Teams

event held at the Vauxhall Recreation Centre in

David Woulds who teamed up with Middlesex's

Ron Davis - Pam Pearce were 8th nationally in the Portland

Pairs while competing in the Oxford heat. Peter Malpass -

Roger Kerkin were 2nd in the Ranked Regional Masters Pairs.

Alan Cooke and partner were 2nd in the Lanzarote Congress

star-studded team in Round 3 of the Gold Cup.

At the London EBU Easter Festival, in the Swiss

and Tim Rees were 6th.

runners-up. Valerie and Mark Bannister won one of the Pairs

also to Paul Cockayne - Barry Read, 2nd in the Life Masters at

Sam Botfield - Nigel Cooper (playing at Reading BC) and

came 8th and 10th respectively in the Club Stratified Pairs

Get your entries in for the Green-pointed Swiss Pairs and

Swiss Teams on 20 and 21 June, and the Teams event for the

IN the Home Internationals, Paul Barden -

Jonathan Mestel played for England in the first

weekend of the Camrose, finishing top of the crossIMPs;

In the Portland Bowl, Cambridge B (Kyle Lam, Michael

David and Helen Holmes) beat Cambridge A in the semi-final

David Kendrick was 2nd in the Open Pairs at the London

Adam Bowden, Carina Negreanu who were tied in 10th place.

The county's new website is now available at www.

TOP two at the CI Green Point Swiss Pairs were

MANY congratulations to Viv Mably - Graham

Hoare (Devon), who were third in the Exeter heat

of the Portland Pairs. They won £60 each, plus

With only one match to play, against Hereford, all three

Western League teams are well placed in their divisions. The

results so far have been splendid. Out of eighteen matches

played, fourteen have been won, one drawn and three lost.

The C team remains undefeated and leads their division with

Sadly, John Heath has died from cancer. Obituary to follow

with the next magazine.

Diary dates: entries for the Cornwall Congress - at the

in. This year the Championship Pairs will be on the Friday,

with Green-pointed Swiss Pairs and Teams on Saturday and

Sunday. Entries to Chris Bickerdike as soon as possible, please.

column) in the online magazine (page 67 onwards). These pages are also available as a standalone