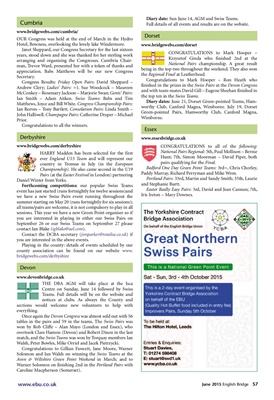 Janet Sheppard, our Congress Secretary for the last sixteen

years, stood down and she was thanked for her sterling work

Trevor Ward, presented her with a token of thanks and

appreciation. Babs Matthews will be our new Congress

Congratulations to all the winners.

HARRY Madden has been selected for the first

ever England U15 Team and will represent our

country in Tromsø in July (in the European

Championship). He also came second in the U19

Pairs (at the Easter Festival in London) partnering

we have a new Swiss Pairs event running throughout the

summer starting on May 20 (runs fortnightly for six sessions);

all teams/pairs are welcome, it is not compulsory to play in alligblake@aol.comThis year we have a new Green Point ojimparker@totalise.co.uk are interested in playing in either our Swiss Pairs on

September 26 or our Swiss Teams on September 27 please

Playing in the county: details of events scheduled by our

county association can be found on our website www.

THE DBA AGM will take place at the Isca

Teams. Full details will be on the website and

notices at clubs. As always the County and

sections would welcome new volunteers to help with

Once again the Devon Congress was almost sold out with 56

tables in the pairs and 59 in the teams. The Swiss Pairs was

won by Rob Cliffe - Alan Mayo (London and Essex), who

overtook Clare Hamon (Devon) and Robert Dixon in the last

match, and the Swiss Teams was won by Torquay members Ian

Solomon and Ian Walsh on winning the Swiss Teams at the

Avon & Wiltshire Green Point Weekend in March; and to

Warner Solomon on finishing 2nd in the Portland Pairs with

Full details of all events and results are on the website.

Krzysztof Ginda who finished 2nd at the

being in the top two throughout the weekend. They also won

the Regional Final at Leatherhead.

and with team-mates David Gill - Eugene Sheehan finished in

the top ten in the Swiss Teams.

CONGRATULATIONS to all of the following:

pairs qualifying for the Final.